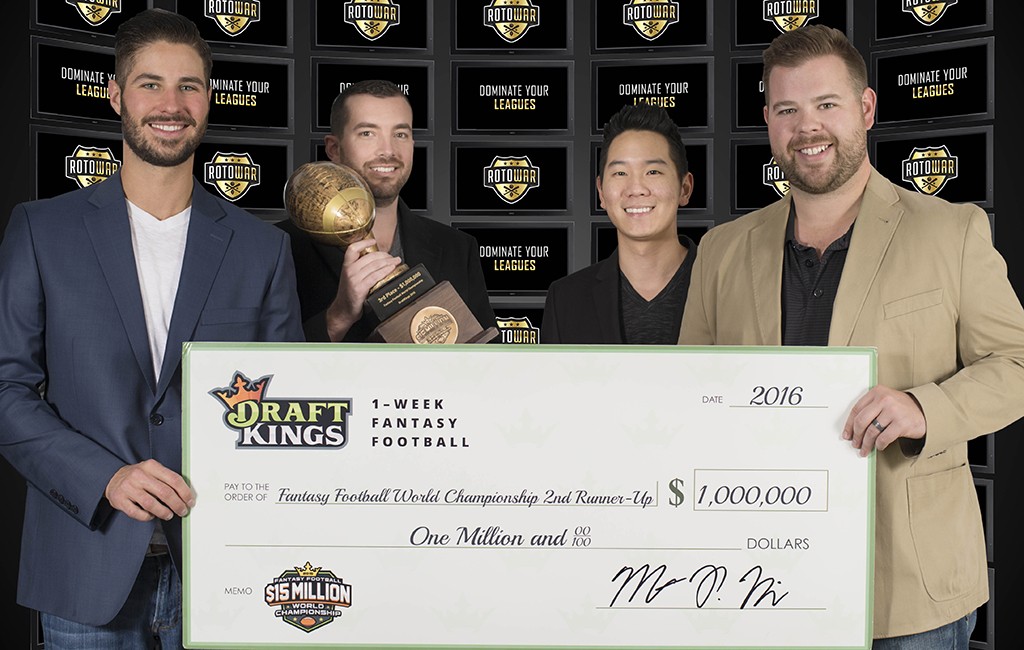 Charles Chon and Nick Dunham, who used their accounting backgrounds to clear millions of dollars in fantasy sports winnings, are now selling their system to sports fans looking to boost their own bankrolls on popular sites DraftKings and FanDuel.

“Now that the industry has evolved, and with the number of people playing now there’s a chance to level the playing field for more novice players,” RotoWar marketing head Paul Tappon said.

Dunham and Chon grew up together in Colorado. They both went to Colorado State University, along with RotoWar’s CFO Paul Zimmerman. Dunham, Chon, Zimmerman and Tappon are all around 30 years old.

Dunham previously worked for Deloitte, and Tappon said that Chon got into daily fantasy football in grad school when he thought he could find an edge in paid fantasy contests through statistical analysis.

The two have been profiled in several daily fantasy industry publications, and are perhaps as well known by the screen names they’ve played under while racking up fantasy sports millions.

Daily fantasy games essentially work like this: players pony up an entry fee, essentially a stake anywhere from $1 up to several hundreds of dollars that they put down to play the game, and pick a lineup of real NFL players to make a team of their own.

The host site, be that FanDuel or DraftKings, assigns each NFL player a price tag based on their past and anticipated performance. Each fantasy player builds a team with a quarterback and enough running backs and receivers to field a real NFL offense, all while keeping their total team salary under a predetermined amount.

Trevor Siemian, for example, is going to cost you a lot less than Tom Brady. So the game is to try and find the best value for the price paid for each player.

NFL players then earn points for fantasy football players points based on the statistics they record on the field. At the end of the week, the fantasy players with the most total points get paid.

And the ones at the top aren’t the football fanatics at the bars for six hours each Sunday, watching four games at a time while constantly checking their phones for fantasy updates and rooting on whatever team is on the front of the jersey they’re sporting.

The winners, at least the big ones, are numbers guys. Players who have figured out how use stats to better predict who’s going to score how many touchdowns on Sundays end up doused in confetti holding the checks big enough to make Publishers Clearing House winners jealous.

The stats the numbers guys use is the product RotoWar is trying to sell. And its target customer is that guy at Buffalo Wild Wings rocking a Broncos jersey and obsessing over a fantasy team that might cost more money than the beers and appetizers or, if he gets lucky, pay for the tab.

Right now RotoWar offers projections for the NFL and Major League Baseball. Their lineup tool will spit out what the numbers say is an optimum player roster for a given contest, and then players are free to tinker around with Chon and Dunham’s estimates by sliding players in and out of the lineup.

If you think you know better – let’s say you’ve got Siemian pegged for two touchdowns this week and RotoWar’s numbers says he’s only going to throw one – RotoWar’s tool allows you to punch in your own statistics, and will then spit out an updated fantasy point projection built on your own model.

So far the company has raised about $150,000 from investors. Tappon said a lot of that went towards putting together a user-friendly website to dress up the sheer numbers that Dunham and Chon used to make their fortunes.

“If you look at their Excel models, as a normal person, it makes your head explode,” Tappon said.

They’ve been up-and-running for about half of two football seasons, with the latest iteration of the NFL lineup maker launching a little more than one month ago. The baseball tool has one season under its belt.

Tappon said making a fantasy basketball lineup tool is RotoWar’s next step. But for the next month or so, now the company’s priority will be squeezing every bit of business it can out of the rapidly closing football season.

“We think that people who have success with football will be prime candidates for our other products,” Tappon said. “Even if they haven’t played basketball before, they’ll have faith in our product.”

Tappon would not say how many subscribers RotoWar has, but added that about 15 percent of the people who peruse the website for fantasy football advice articles and free tips do pony up for the paid statistical products.

But Tappon said he thinks there’s still plenty of room in the market for advice sites, and he thinks RotoWar’s projections will stand up with the best of the best in the game.

The RotoWar guys aren’t the only Denver entrepreneurs building a business on fantasy football. Bo Brownstein launched the Fantasy Sports Combine, a hybrid fantasy football advice summit and trade show, ahead of the 2015 NFL season.

Tappon, who said RotoWar’s founders had their most profitable football season ever last year, said they’re not worried about cutting into their own fantasy football winnings by selling the secret sauce.

“We’re not concerned with oversaturation,” he said. “Because not everyone’s going to use the same lineup.”

And at least for Chon, oversaturation definitely won’t be a problem. The fantasy football millionaire tweeted recently that he’s retiring from the high volume, daily fantasy grind after his next losing week (“unless I have an amazing last few weeks,” his twitter page proclaims).

Now he’s got his eyes on a prize even bigger than a FanDuel novelty check.

“My next goal: To make a football website worth nine figures,” Chon tweeted. 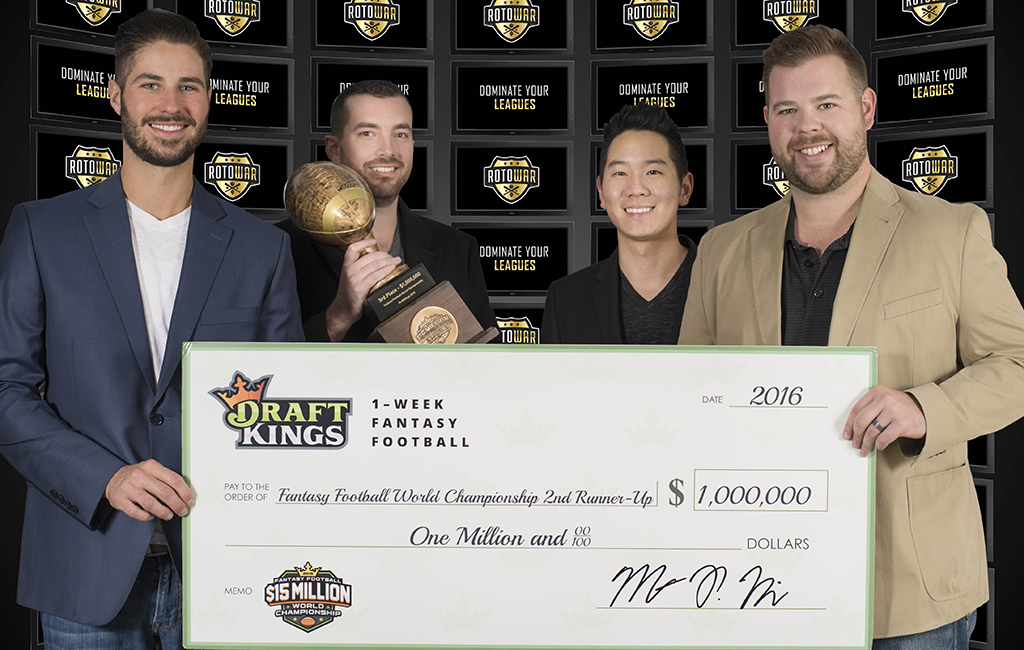