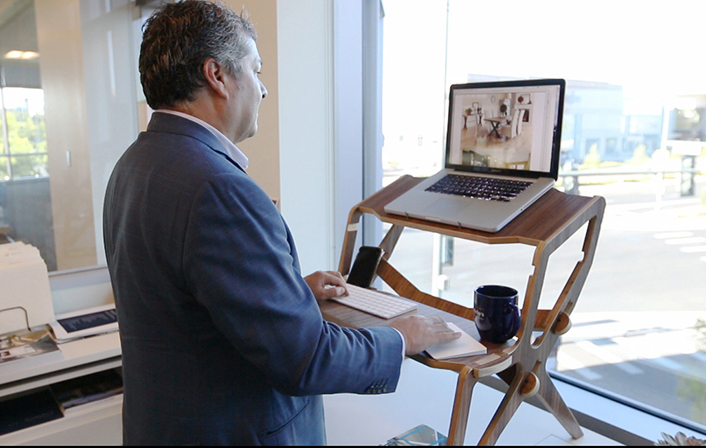 StallDesk is a two-tiered, all-wood platform that rests on a regular desk. (Courtesy StallDesk)

When it comes to stretching, Mike Mallory is no slouch.

The 33-year-old former exercise specialist founded his first business, a line of foam rollers for loosening muscle called Rad Roller, after six years coaching people on how to get back in shape after an injury.

And yet, sitting in his cubicle at Rad Roller headquarters just north of Mile High Stadium, Mallory felt a little tense around the shoulders. “I work at a desk all the time, despite working at a business centered around health and wellness,” he said.

So Mallory, who studied physiology at the University of Colorado Boulder, started tinkering with a design for a standing desk. Mallory’s latest startup, StallDesk, on Tuesday cracked through a $20,000 funding target on crowdfunding website Kickstarter.

Mallory said the crowdfunding project, which ends on Friday, is a way to fund StallDesk production and attract publicity.

StallDesk is a two-tiered, all-wood platform users place on their desk; and they use the top tier with an external keyboard for a standing desk or use the lower tier to keep the laptop at eye level while sitting. 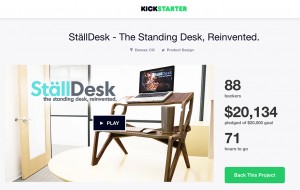 Denver-based StallDesk has surpassed its Kickstarter goal, with 88 backers on the crowdfunding site.

At a retail price of $200, StallDesk is significantly less expensive than bigger competitors, Mallory said, which use pricier steel frames or hydraulics to cantilever up and down.

Mallory also thinks StallDesk has superior design for improving posture, since users don’t have to look down and strain their necks.

A self-described “biomechanics nut,” Mallory started Rad Roller in 2012 as a tool for his physical rehab customers to keep working on muscles and joints outside of their therapy sessions with him.

Mallory is also the founder of Zen Posture, a startup that makes meditation benches, which are designed to promote good posture and comfort when meditating.

Mallory started that business around the same time as Rad Roller, because he could only find meditation furniture inspired by Hindu and Buddhist designs. Zen Posture makes simple wood benches, wood altars and cushions, which Mallory said are popular with young professionals.

Not one to strike an awkward pose, Mallory has opted to keep the three brands – Rad Roller, Zen Posture and StallDesk – as separate businesses, since each caters to different customers.

StallDesk is a two-tiered, all-wood platform that rests on a regular desk. (Courtesy StallDesk)

A 33-year-old former exercise specialist and fitness entrepreneur has launched his third venture, an adjustable desk extension that he says won't break the bank.