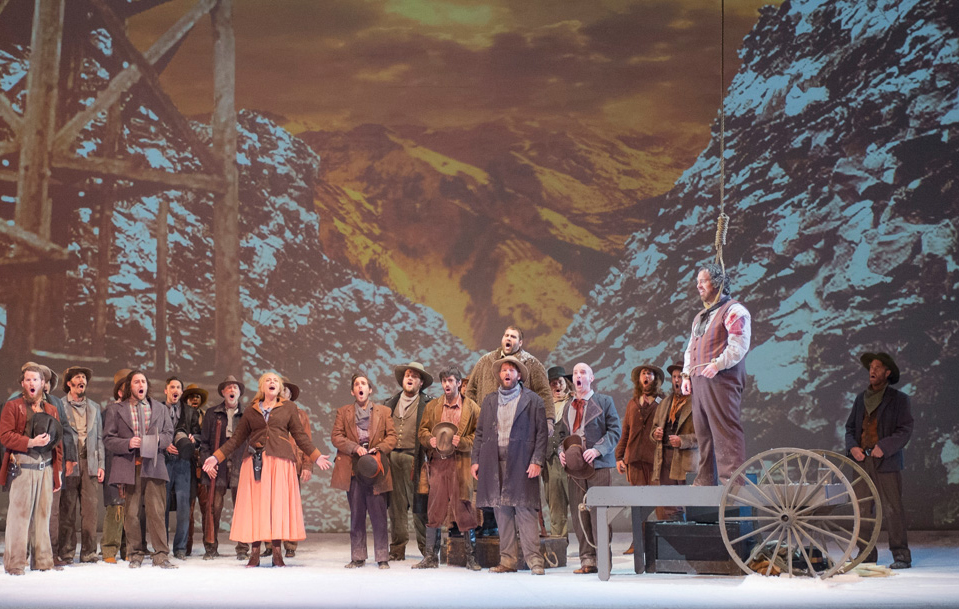 The opera is going high tech.

Opera Colorado is debuting a new show – La Fancuilla Del West – Nov. 5 with a six-figure video projector system that even gives seats in the mezzanine a view of the mountains.

The show uses projections of historical images and new video footage as a backdrop for a mining camp and a mountain cabin in 19th century Colorado.

Greg Carpenter, general director of Opera Colorado, said the new technology is part of the nonprofit’s plan to attract younger audiences not accustomed to traditional opera.

“If we’re going to bring in new audiences, I think we need to have a much more updated feel to how we produce opera,” he said. “And we have to be sure that we’re keeping up with what’s happening in the industry, so that other opera companies can either coproduce with us or potentially rent (projector equipment) from us.”

Opera Colorado is buying its projector system in installments. So far, it has purchased a projector courtesy of a $50,000 grant from the Bonfils-Stanton Foundation in 2015 and the hardware needed to load and manipulate images using a $25,000 grant from the Boettcher Foundation. Carpenter said the nonprofit plans to one day own five projectors and might rent its equipment to other productions.

The new projector is a grace note as the nonprofit turns up the volume on programming. After a sudden hush in contributions in its 2012 fiscal year, Opera Colorado temporarily scaled down to two productions a year.

This season marks a crescendo back to three productions. The nonprofit’s revenue has similarly rebounded, from a four-year low of $2.8 million in 2012 to $3.2 million for the 2014 fiscal year, which ended June 30, 2015.

La Fanciulla Del West, a Puccini opera that translates to The Girl of the Golden West, will cost around $800,000 to produce, said Carpenter, not counting administrative expenses.

Puccini originally set his opera during the California gold rush, but Opera Colorado has opted to transport the plot to Colorado instead, putting the production’s set in the spotlight.

With just three physical sets – a bar in a mining camp, a cabin the mountains and outside in front of the mine – projections combining video of the Rocky Mountains shot last winter with images and maps collected from the Denver Public Library let Opera Colorado transition from day to night without drawing a curtain, Carpenter said.

“Because we’ve set this production in Colorado, what’s unique to it is that we can project the actual mountains of Colorado,” said Carpenter. “There’s some video in the piece that actually is a cabin that was photographed and videoed on a mountainside in Colorado, you can’t recreate that with traditional, hard sets.”

La Fanciulla Del West, which is sung in Italian with subtitles in English and Spanish, runs between Nov. 5 and Nov. 13.

As part of a five-year strategic plan started this season, Opera Colorado is growing across the board. The nonprofit aims to double the number of singers that run one of its educational programs, for example, and has brought on a director of development and a communications manager just this year.

Carpenter is particularly excited about the third show this season, which Opera Colorado will perform not on its usual stage at Ellie Caulkins Opera House, but at The Pinnacle Charter School in Thornton.

“It’s important that we don’t just sort of hold ourselves up in the four walls of the opera house,” he said, “that we have the ability to take smaller scale shows of significant out and do them in people’s backyard.”

Ticket prices might also make the show more accessible: the most expensive seat at Pinnacle will cost $75 – compared to the usual ceiling of $200 at Ellie Caulkins, Carpenter said.