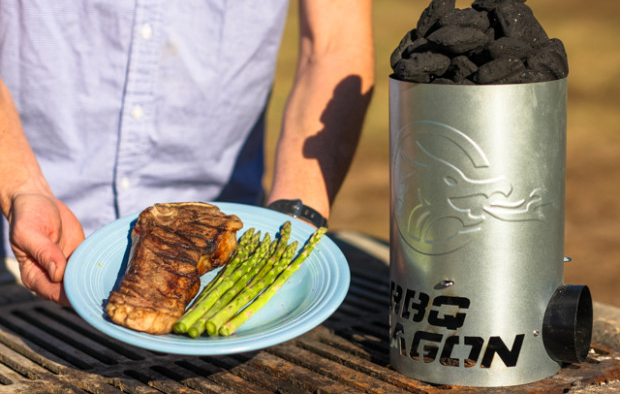 The gadget is a riff on the cylindrical chimneys that prod the charcoal to catch fire, which includes a side hole that lets the user insert more fuel for their fledgling fire. (Courtesy BBQ Dragon)

To launch their second grilling gadget, a pair of brothers has fired up a $35,000 crowdfunding campaign.

“One day years ago, we had such trouble starting a charcoal grill,” recalls George Prior, 52. “Next thing you know, you’re doing something completely different in your life.”

George and his brother Bruce Prior were, and still are, real estate investors. But in 2013, they raised $100,000 on Kickstarter to fund BBQ Dragon, a wireless device to fan the flames of a charcoal grill. Unwilling to license the technology to a manufacturer, they decided to develop a line of grilling implements, also called BBQ Dragon. Last year, BBQ Dragon had sales of $200,000, Prior said.

The brothers’ second gadget is a riff on the cylindrical chimneys that barbecue enthusiasts fill with newspaper on the bottom and charcoal on top to prod the charcoal to catch fire. Developed over the course of two years, the Priors’ version includes a side hole that lets the user insert more fuel for their fledgling fire.

Or, conveniently, its side hole is a perfect place to use the brothers’ fan. 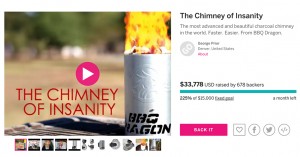 The Chimney of Insanity launched hit its $15,000 goal on IndieGoGo within 24 hours.

The Chimney of Insanity launched last week and hit its $15,000 goal within 24 hours. There’s a month left in the campaign.

George said about two thirds of the money will go into production and the reminder into shipping costs.

Target, Walmart and Bed Bath and Beyond already stocking the company’s fans and have signed on to start carrying the chimneys in mid-November, George said, when product for the crowdfunding campaign’s supporters is also scheduled to ship.

“(Retailers are) not as enthusiastic about a small company that has one product,” George said.

A smaller slice of the company’s business comes from selling directly to consumers from its website.

The brothers are also betting that its sleek designs – the chimney, for example, has the company’s logo punched into the side as ventilation and a heat-resistant handle that matches BBQ Dragon’s fan – will catch the eyes of consumers accustomed to barbecue wares that look like “same tools that we have been working with for decades.”

George said the next product in their pipeline is a grate that can spin inside of a typical charcoal grill, so that the person manning the grill can simply rotate the grate rather than scoop up a patty every time the flames flare.

For now, the brothers are the only full-time employees and work out of an office in Lakewood. Both of their products are made in China, and they outsource warehousing to a fulfillment company in Broomfield.