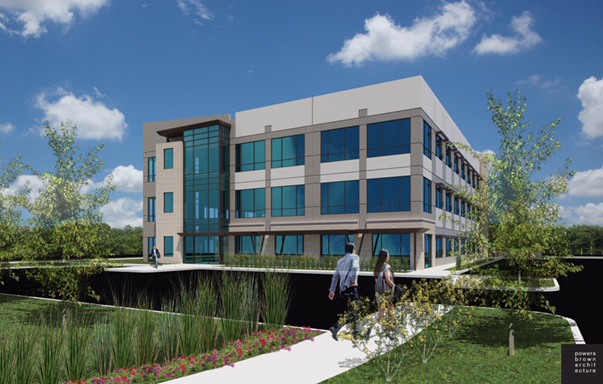 A rendering of the upcoming offices at 4624 N. Central Park Blvd.

Bursting out of an office that is now in the wrecking ball’s path, a concessionaire company is building itself a new headquarters.

Building co-developer John Comunale said SSA grew out of its office at the National Western Complex, a space it will need to vacant anyway to make way for the planned stock show redevelopment.

“Their current space is about 11,000 square feet, and they’re on top of each other,” Comunale said. “They’re sharing offices; they’re sharing cubicles.”

One Central Park, as the new building will be called, will take shape at 4624 N. Central Park Blvd., just north of the Drury Inn and Suites off of Interstate 70. Right now the city owns the real estate, but Comunale said they will buy the property in a deal closing next month.

Plans call for about 45,000 square feet of office space between three stories. SSA will take about half of the building, Comunale said, with its office on about half of the first floor and the entire second floor.

They’ll then lease the remaining office space on the first and third floors. Comunale said they’re targeting rent rates between $18.50 and $19.50 per square foot. Robert Knisely and Allison Berry are the leasing agents for the building.

Comunale said SSA reached out to his firm for help finding a property and building new office space with its relocation imminent. He said they ended up in Stapleton because it will help SSA stay close to its own workforce.

“Stapleton is really proximate to everything, with access to the airport, and they have a large employee base that lives in Stapleton and the surrounding areas,” he said. “They also have employees that come and go from other offices around the country, so being near the airport is important.”

Service Systems Associates was founded in 1971 and provides food and beverage and catering services at more than 50 attractions around the country. Locally SSA’s client list includes the Denver Zoo, History Colorado Center and Denver Mart.

A rendering of the upcoming offices at 4624 N. Central Park Blvd.

Bursting out of an office that is now in the wrecking ball's path, a concessionaire company is building itself a new headquarters.