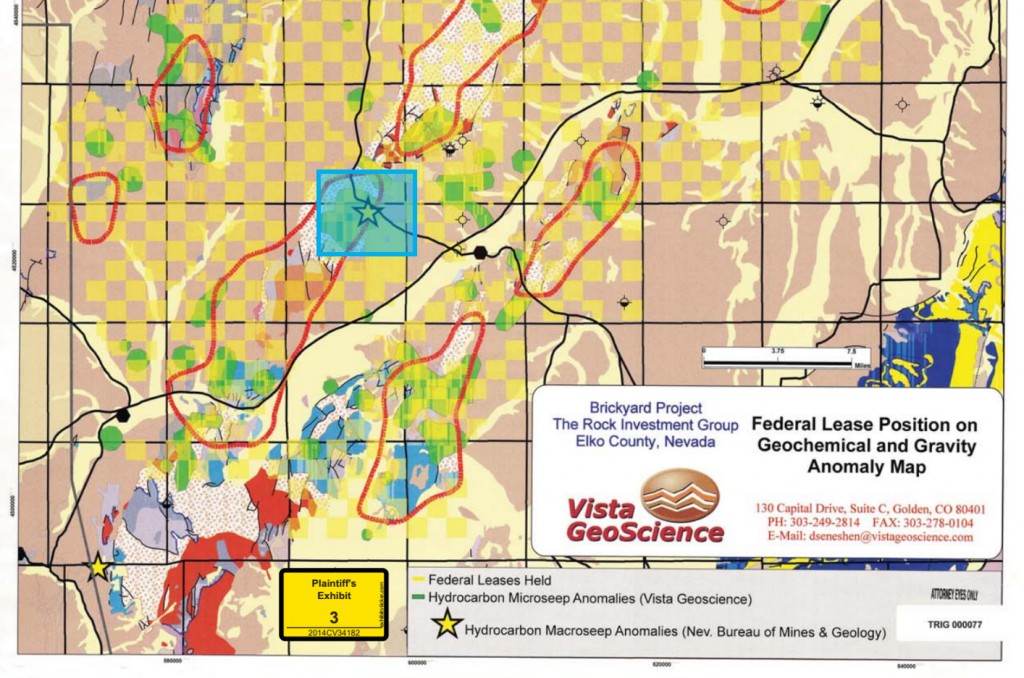 A map from The Rock Investment Group charting oil territories, included in the 2014 lawsuit.

A Greenwood Village-based oil exploration company that challenged oil-and-gas behemoth Noble Energy in a Denver court has filed for bankruptcy with just shy of $3 million in debt.

After selling some of its leases in Nevada to Noble Energy, The Rock Investment Group (TRIG) tried to snag them back in 2014, claiming Noble assessed the value of leases using TRIG’s trade secrets.

TRIG sued Noble in 2014 and is now appealing a 2015 decision in Denver District Court that ruled in Noble’s favor. (Houston-based Noble has an office downtown.)

According to court documents, TRIG was started in 1995 and leases oil, gas and mineral claims. Among $11.5 million in assets listed in its bankruptcy filings, TRIG lists royalty interests, leases, and permits in northeast Nevada.

In June 2009, a newspaper in Nevada reported that TRIG was the only oil drilling project in one local district in a decade, after two wells drilled in the 1980s and ’90s came up dry.

Larry McGary, then the CEO of TRIG, told the Elko Daily Free Press that the spot was “a very difficult geological environment, but it has potential.”

Later that summer, in a letter written to investors included in court records, McGary waxed Biblical and recounted that drilling subcontractors had exacerbated difficulties by making costly errors.

“The enemy has tried hard to discourage us,” McGary wrote. “But we have steadfastly trusted the Lord that His Vision’s fulfillment is certain.”

In 2010, a Nevada county court tasked with resolving a dispute between McGary and other company leadership replaced him as CEO. The court also found that TRIG had “no cash, no income, $1.7 million in accounts payable to creditors, lease payments and other expenses of $200,000 per month, and assets of questionable value that cannot cover the debts and monthly expenses.”

Reached by phone, some creditors listed in bankruptcy filings said they hadn’t heard from TRIG for years.

McGary, identified only as a shareholder in bankruptcy court filings, continues to own a 33 percent stake in TRIG. That’s more than the company’s current president, Robert Angerer, who owns 15 percent, and its treasurer, Robert Yurglich, who owns 4.5 percent.

TRIG is headquartered at 5251 S. Quebec Street in Greenwood Village in the same suite as accounting firm Spicer Jeffries, where Yurglich is listed as a managing partner.

Neither Angerer, Yurglich nor TRIG’s counsel in the bankruptcy case, Jeffery Brinen of Kutner Brinen, returned messages from BusinessDen.

Among its debts, TRIG lists more than $750,000 in legal expenses owed to Noble Energy and its legal counsel, Wheeler Trigg O’Donnell. But it is appealing those charges in Denver District Court. Stadium Management CO LLC, the company that manages Mile High Stadium, is also a creditor.

A map from The Rock Investment Group charting oil territories, included in the 2014 lawsuit.

A Greenwood Village-based oil exploration company that challenged oil-and-gas behemoth Noble Energy in a Denver court has filed for bankruptcy with just shy of $3 million in debt.