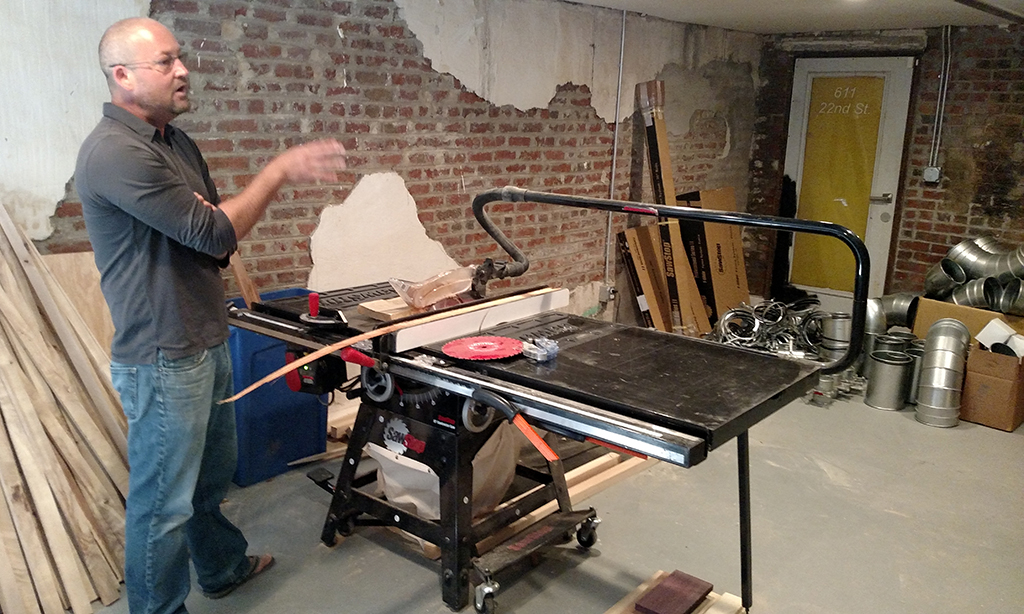 A new woodworking shop is cutting its way into Five Points.

I Made It, a two-year-old company that helps amateur woodworkers with projects from handheld crafts to bedframes, has quadrupled its shop space by moving to a 2,000-square-foot retail spot off Welton Street in Five Points.

The shop, run by husband-and-wife team Francis and Loretta Eggelton, is moving from a smaller space on Santa Fe Drive.

“We got way too busy, way too quickly over there,” Francis said. “We had customers calling to schedule appointments by asking, ‘when are you not busy?'” 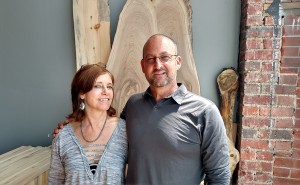 Franice and Loretta Eggelton started the company in 2014, in a small shop on Sante Fe Drive. (Burl Rolett)

The new I Made It workshop is at 615 22nd St., on the first floor of the former Melbourne Hostel. The company offers three levels of woodworking classes at $15 apiece, and sells wood to customers whenever they come in to work on a new project.

Crafts can cost anywhere from $45 to around $1,800 for the biggest tables and bedframes, Francis Eggelton said.

The courses are classified like ski slopes. Finish the green course, and you can use some of the simpler saws in I Made It’s workshop. But you’ll have to pass the black diamond class before touching the bigger power tools.

The Eggeltons say the concept keeps costs down by running a “forest-to-table” shop. All the wood comes from the Black Forest near Colorado Springs, where the Eggeltons and two other workers trudge twice a month to pick up new timber.

I Made It also makes a little money by selling beer and wine at a small bar that customers can drop by after finishing up on the table saw. 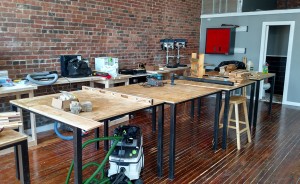 The shop’s wood comes from the Black Forest near Colorado Springs. (Burl Rolett)

The Eggeltons live in Larkspur, Colorado, 45 minutes south of the Denver woodshop. Francis is a longtime woodworker and Loretta has an artistic background in sculpting and painting. Both keep full-time jobs aside from I Made It.

They came up with the woodshop idea a few years ago. Loretta said they took inspiration from places like Sipping n’ Painting, where customers would come in to make a craft while chatting and drinking.

“We liked the idea, but wanted to do something a little bit more substantial,” she said. “Something that would be of interest to both men and women.”

They looked at places in both Colorado Springs and Castle Rock before opening their first workshop at 869 Santa Fe Drive in 2014. Francis said between 50 and 80 people would come through their first location in a week.

They grew out of the space not only because I Made It had more customers, Francis said, but also because their customers wanted to do bigger and bigger projects.

“They would do one small project,” he said. “Then straight away asked ‘can we come in and make a table?'”

I Made It looked for new space for a year before coming to a workshop in the Highlands, Francis said. They were already negotiating lease terms when their real estate broker showed them the Five Points location.

Francis said the 22nd Street spot won out because it would cost much less to outfit.

“The Highlands location would have needed a lot more finishing,” he said. “We would have had to give it a bigger facelift, and a new HVAC system.”

In the new space, the Eggeltons want to grow their customer base to more than 100 visits per week. With more room to work with, they think they can also grow their corporate outing business. They expect larger groups could make up between 20 percent and 30 percent of their revenues.

The Five Points spot, though a brand new retail space, did take a little touching up. Francis Eggelton said they’re investing between $100,000 and $150,000 in new tools and a new dust collection system. All told, Francis said, about 70 percent of the tools are new.

Right now the shop holds a host of workspaces to the left on the main floor, with the bigger table saws in the basement. One of the few new, permanent pieces of furniture is the wooden bar in the corner.

And of course, in the most literal “forest-to-table” sense, the Eggelton’s built that one themselves.

A two-year-old company that helps amateur woodworkers has quadrupled its shop space as it cuts into Five Points.