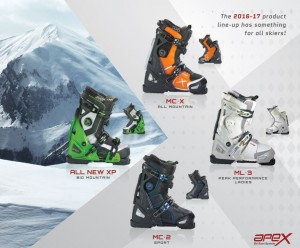 The company has raised $1.5M since June, in an effort to develop improved boot prototypes. (Courtesy of Apex)

A local ski boot company is going where the skiers go: Interstate-70.

“We were in the outreaches of Boulder, almost to Gunbarrel, so we were really inaccessible to consumers,” said Brian Ellwood, who manages business operations at Apex Ski Boots. “We were looking for property along the I-70 corridor convenient for skiers going to pretty much all of the mountains in Colorado.”

Apex is pitching its new headquarters in Golden, at a site off the Youngfield Street exit in Wheat Ridge.

Boots won’t be for sale, but the new digs will include a 700-square-foot lobby for trying on gear, as well as offices and storage. Apex plans to open by early October – or as soon as it hoists a sign facing the highway.

The ski boot company has raised nearly $1.5 million from investors since June, according to an Aug. 3 SEC filing under the name Apex Sports Group. Ellwood said much of that money will go toward designing future products.

“With ski boots, the tooling of the prototypes and what goes into creating new molds for new models is quite expensive,” Ellwood said. “Our investments are mostly in product development.”

Unlike a standard ski boot, which has a plastic outer shell and an inner liner, Apex boots have an inner liner nested inside a walking boot with Boa fasteners and sitting in a stiff chassis.

“It’s essentially a beefed up snowboard boot inside a chassis. We’re kind of dealing with a Russian egg scenario,” Ellwood said.

“Europe has the biggest snow sports in the world, so we’d love to have a much bigger presence there.”

Ellwood said the design hitting the slopes this season is an answer to Apex’s critics in the ski gear industry, who have complained that the design is too long, bulky and heavy. This year’s model is shorter, Ellwood said, because it removes the plastic piece that sits in front of skiers’ toes in earlier models.

“In the skiing world, every little centimeter counts. It equates to more weight, it equates to less performance,” he said. “This boot is toeless, allowing us to shrink it by a centimeter, so it brings us within four millimeters of its competitors’ length per size.”

The company has raised $1.5M since June, in an effort to develop improved boot prototypes. (Courtesy of Apex)

Apex Ski Boots is using the funds to produce its newest model of ski boots – designed to be more comfortable than the industry stand-by.