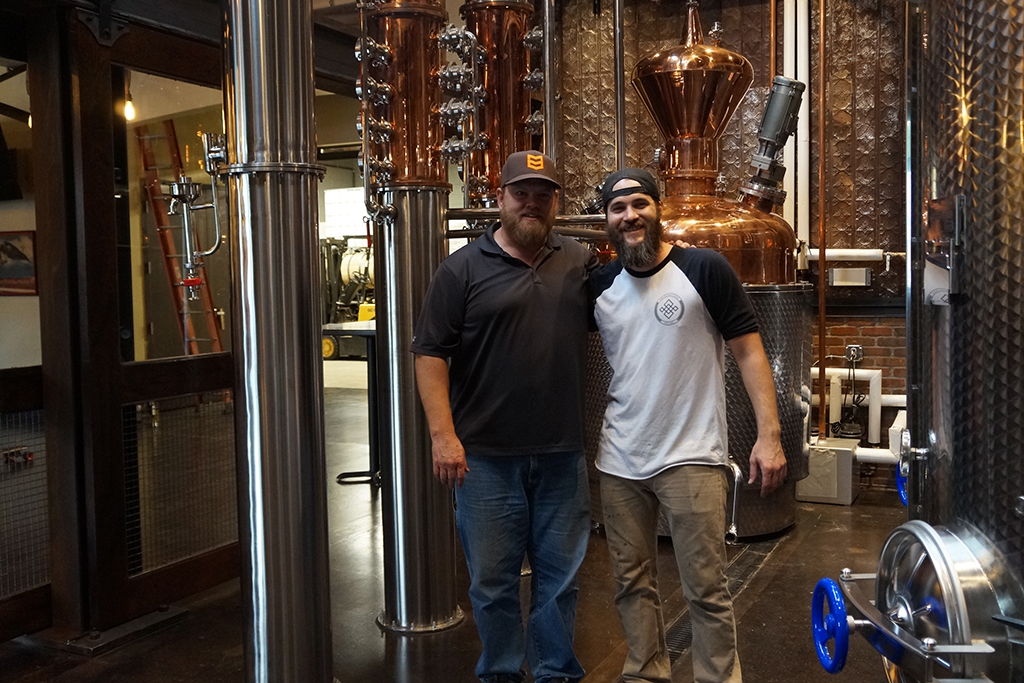 For 15 years, Dustin Evans tinkered with his yellow Corvette and copper Camaro in a downtown Littleton warehouse.

But after 18 months of renovations, he rolled open his garage door for a new hobby and business on Friday night: a distillery called Rocker Spirits.

“We just wanted a vintage, industrial look and feel,” said Evans, 52. “I love how it echoes a time in our country when we used to make everything with our hands.”

Evans is launching the distillery with friend Patrick Johnson, 53, and former Breckenridge Distillery distiller Nick Hutch, 30. Their venture is the product of good timing: Evans and Johnson met Hutch just as he was leaving his job at Breckenridge and just after Littleton started to allow distilleries. 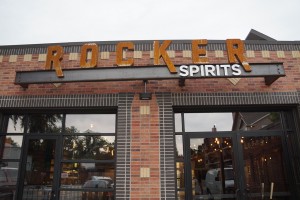 Hutch said customers can join the Rocker team in its garage-turned-taproom for drinks or bottle purchases. (Amy DiPierro)

Plus, they already had the perfect space: Littleton had crafted a new regulation allowing distilleries in the city based on a permitting official’s unrelated visit to Evans’ warehouse.

The team spent much of the last year building the Rocker Spirits still and taproom themselves at Evans’ garage, along with workers Evans knows from his two construction companies.

The place still looks a bit like a garage, with car bumpers are parked on the walls, steel beams fronting the bar and a heavy hook and chain hangs from the ceiling like a chandelier.

Rocker bought 30 barrels of whiskey, rum and vodka from distilleries in Missouri and Minnesota to prepare for its grand opening later this month. They’ll package and sell the liquor under the Rocker name while they work on getting their own distillery up and running to produce their whiskey, vodka and rum at the Rocker garage.

And for the past several days, the group has been working an old school assembly line late into the night: One fills the bottles, the next sticks the labels, the third heat-shrinks plastic over each cap.

Hutch, the head distiller, previously worked at Breckenridge Distillery. He said Rocker will stand apart from the roughly two dozen distilleries that call the Front Range home because it has a distinctive-looking taproom and bottle. And because bar-goers can join the distillers for a shot.

“We’d rather you come down, sit with us and drink with us, than come to a liquor store and buy a bottle,” he said.

Rocker will also be the first distillery to hail from Littleton, which passed an ordinance to allow distilleries in 2013. 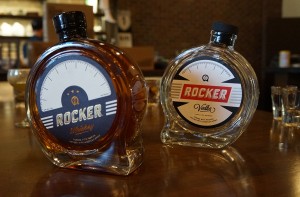 “There are a few within 15 to 20 minutes, but down here – Highlands Ranch, Littleton, Sheridan, Englewood – I think people are looking forward to the distillery, one where you can get a classic cocktail that’s made well,” said Hutch. “There’s enough room for all of us.”

The next challenge is to keep its taproom topped up with customers. The distillery will seat about 60 people inside and another 30 outside on a patio.

And, of course, to start distilling. Hutch said Rocker has enough fermenters to make between 160 and 212 gallons of liquor a week.

The plan is to sell bottles and pour drinks in the taproom only to start. Distribution to local bars would be next. Evans, Johnson and a third, unnamed investor are funding the distillery’s startup costs through personal cash.

“The next thing, is to just grow the business, calculate it and to expand our market into the greater Denver area,” said Evans.

Like its taproom, the distillery’s name and bottle design started life in a garage.

Both are inspired by an old oil-can Evans came across while picking through antiques: tilt the can forward to pour, release it and it rocks upright without spilling.

The car motif continues on the bottle labels, made to look like oil pressure monitors and other car gauges.

Rocker already has an order of 19,600 bottles from Owens-Illinois, the company that makes bottles for Jack Daniel’s. It plans to order a batch of 40,000 next.

After 18 months of renovations, entrepreneurs opened the converted garage as a spirit distillery - the first of its kind in Littleton.