A view of the home on Google Earth.

The house that Broncos built is a 33,000-square-foot sports lover’s paradise, complete with a two-lane bowling alley, a squash court, an indoor golf simulator with a putting green and projector, a gym and a wood-paneled study stuffed with Shanahan’s Broncos memorabilia.

The 3.8-acre property, located at 8 Cherry Hills Park Dr. in Englewood just east of the Cherry Hills Country Club, is being listed by Sandy Weigand of Kentwood Real Estate.

The man who coached Denver to two Super Bowl wins in the late 1990s lives in an estate big enough to host the whole team. The house has six bedrooms and 13 bathrooms, a pair of kitchens and a 2,000-square-foot guest house.

Guests enter through a glass front door that opens onto a seating area arranged around a custom Italian mosaic and sitting beneath a domed skylight.

That’s to say nothing of the adjoining music room, its grand piano lit by chandelier, nor of the vine-covered limestone balcony overlooking a 65-foot pool. 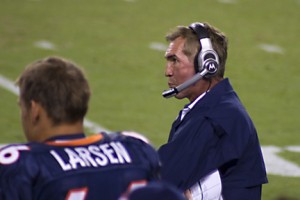 The house includes not only a wine grotto — a room with a twelve-chair dining room table, which guests enter by descending a spiral staircase — but a “reserve red wine cellar” with seating for four.

Even the master bathroom has “an antique fireplace from Europe” and “gemstone quality onyx,” promotional materials for the property note.

Shanahan was Denver’s head coach from 1995 to 2008, coaching the Terrell Davis and John Elway-led Broncos to back-to-back Super Bowl titles in 1997 and 1998.

He purchased 8 Cherry Hills Park Dr. in 2006, Arapahoe County property records show. But soon after the home was completed in 2008, Shanahan got fired from his post at the Broncos following a playoff dry spell. He would later coach the Washington Redskins from 2010 to 2013.

Also in 2010, Shanahan sold the smaller of his two Cherry Hills Village homes for $7 million, about equal to the annual value of his Redskins coaching salary. That price made it the most expensive home to sell in the Denver area since 2008, according to Denver Real Estate Watch.

But he has hung onto the larger property, which went his the market earlier this week. Peyton Manning, then the Broncos’ recently-crowned quarterback, even lived there for a time while looking for his own place in 2012.

A view of the home on Google Earth.