BlueKudu, a cannabis chocolatier, plans to grow its own marijuana for use in chocolates. Photo courtesy of BlueKudu.

Local cannabis chocolatier BlueKudu is pouring $1.5 million into a 20,000-square-foot production facility that will include a big new kitchen and a greenhouse for growing marijuana in house.

BlueKudu founder and owner Andrew Schrot, 34, started making chocolate edibles out of a commercial kitchen in Five Points in 2012. Last summer he purchased a warehouse at 4805 Kingston St. in northeast Denver for $975,000, according to property records. The company hopes to move in by fall.

Schrot said growing his own cannabis is more cost-effective than purchasing oils from other producers to use in his 10 flavors of chocolate.

“We want to get to the point where we’re completely vertically integrated,” he said. “We feel that will give us a lot more quality control as far as being able to stand behind the whole process.”

Right now, BlueKudu squeezes 3,000 chocolates a day out of a 1,500-square-foot kitchen where it has to pull double shifts.

The budget for renovating the warehouse and building a greenhouse will be about $1.5 million, Schrot said. BlueKudu hired Aaron Valdez of Cushman & Wakefield as the real estate broker, John Garner as the architect and Jay Melvey of MPB Contractors as the general contractor.

The name BlueKudu comes from a species of African antelope. Schrot said he chose the name because he liked “blue” as a more discrete alternative to the many marijuana products that go for a green twist. 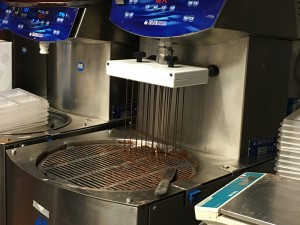 The company currently produces 3,000 chocolates per day in a 1,500-square-foot space. Photo courtesy of BlueKudu.

The company also is doubling down on the name: Denver marketing firm BrandJuice redesigned BlueKudu’s labels to include a picture of its four-legged namesake.

The chocolatier has 15 employees full-time and expects to add five by year-end.

Schrot estimates BlueKudu is on shelves at 75 percent of the state’s dispensaries. While the brand is focusing on sales growth in Colorado for now, Schrot would like to license his recipes to manufacturers in Oregon, Washington, California and Arizona.

Schrot wouldn’t share exact sales figures, but said the company has sold over 1 million bars since opening, and last year’s revenue was 10 times what the company recorded in 2012.

Schrot said he’s excited to have more space for BlueKudu to experiment with new products, like brownies, fruit gummies and lotions.

BlueKudu, a cannabis chocolatier, plans to grow its own marijuana for use in chocolates. Photo courtesy of BlueKudu.