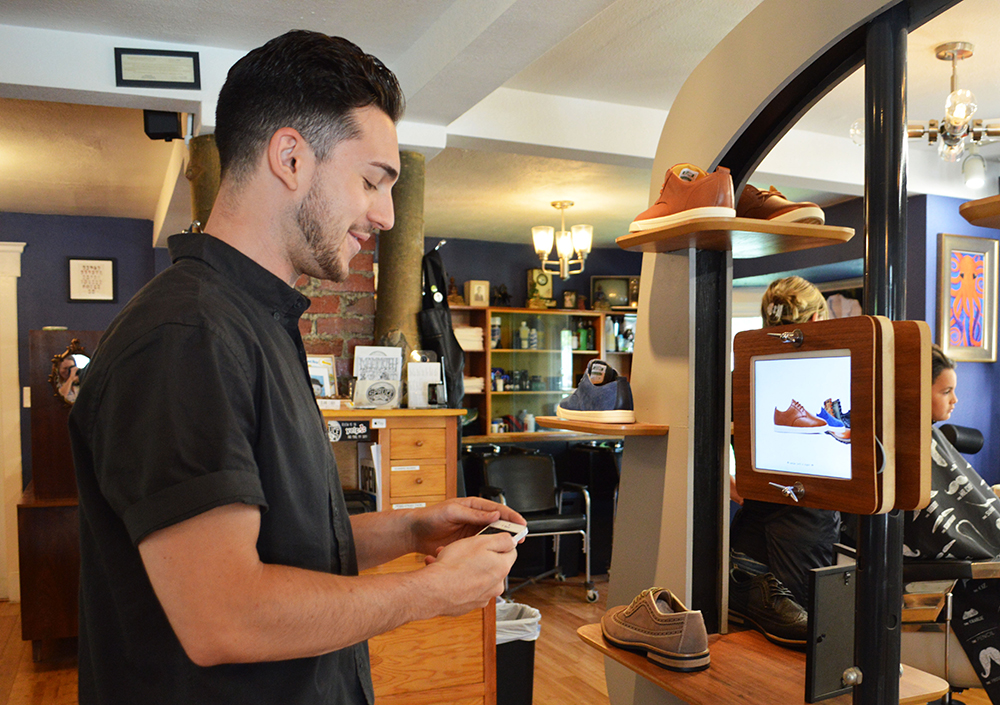 Manager Zach Schulman shows how customers can see the shoe inventory on the Ipad. Photo by Stephanie Mason.

A Berkeley barbershop and menswear boutique with a knack for using WiFi-connected devices has raised $120,000 to put toward a second local store.

“We’ve got location two set in our sights right now,” said Taylor, adding that Spruce will consider Denver and Boulder neighborhoods with a high concentration of men ages 25 to 40 with disposable income.

The startup recently received a $120,000 investment, according to an SEC filing on June 28. Taylor said the money comes from a Minnesota Techstars accelerator program sponsored by big-box retailer Target. The Romeros have temporarily relocated to Minneapolis to attend the incubator. 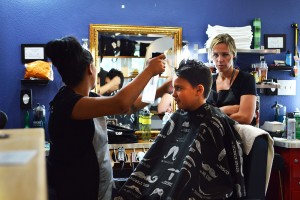 Gabriel Cordova sits for a haircut at Spruce’s current outlet.

The Spruce store is stocked with sunglasses and hats, hair and grooming products and a variety of clothing and footwear. Barbershop prices start at $20 for a half-hour shave and go up to $65 for a 75-minute shave and haircut. The shop has eight employees, four full-time and four part-time.

Even before a customer strolls in, a widget logs that he’s passing the front door. Another pings employees that his appointment is on deck. And a third lets him play an arcade game while he waits.

“People say, ‘How do you guys always know who I am?'” said Taylor. “I say walking into the shop is like logging in.”

Spruce customers can browse footwear and order a pair to try on without speaking to a clerk. A wall menu counts down the wait time to the next shave. The shop’s street-facing sign flashes each time a customer books an appointment. 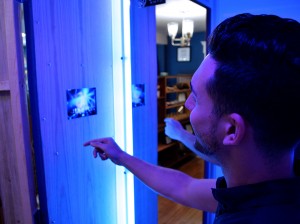 Manager Zach Schulman shows the iPad in the dressing room that simulates different lighting situations – this is the club theme. Photo by Stephanie Mason.

Spruce sprouted after Rebecca left a digital marketing job and Taylor, a software developer, left a full-time gig at a local tech startup.

Rebecca had been taking night classes in fashion retail management. As an experiment, she and Taylor offered to give a male friend a style makeover, only to discover that between outfitting him with clothes, accessories and a new haircut, the transformation took four days.

“That’s when we realized, it’s got to have everything, it has to be in one spot,” said Taylor.

So Spruce became both a barbershop and a clothing store. Taylor is particularly proud of the store’s style consultations. Booking an appointment is free, he said, but many customers leave with a full outfit in their shopping bags.

Last year, the shop pulled in $210,000 in revenue, Taylor said. And with the Techstars investment, Taylor has left the software development side gigs that have helped pay the bills for the last two years.

Manager Zach Schulman shows how customers can see the shoe inventory on the Ipad. Photo by Stephanie Mason.