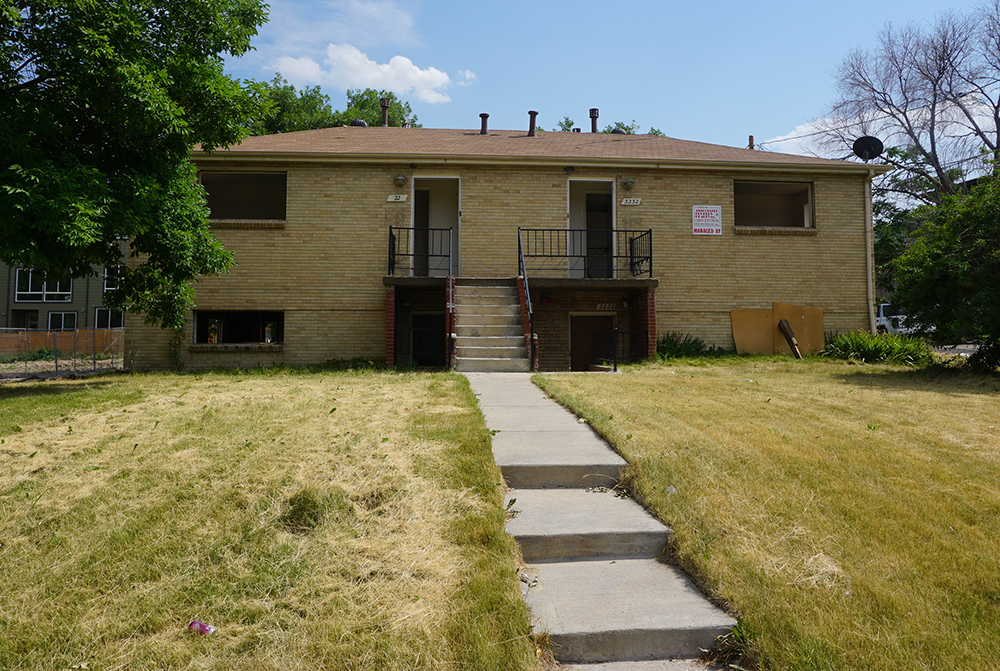 A local developer plans to repurpose this property into more than a dozen townhomes. Photo by Burl Rolett.

“We were basically just knocking on doors and calling people in the area, and we called the lady who owned this lot,” said Truman, who bought land for a 20th Avenue project in Sloan’s Lake last year for $1.1 million.

“You strike out most times, but she was actually in the market to sell soon.”

Truman soon will break ground on 16 townhomes fronting 20th Avenue in Sloan’s Lake. He plans to sell units for about $475,000 in hopes of enticing customers who want to live near downtown.

“If you search for something new under $500,000, you would probably find two or three units,” Truman said.

Truman’s site sits on 20th Avenue between Irving and Hooker streets. The project will add to nearly 40 units Truman has built or is building between Jefferson Park and Sloan’s Lake.

The townhomes will measure about 1,500 square feet with two bedrooms and two bathrooms, Truman said. They’ll be three stories, with two-car garages and rooftop decks.

Truman has seen a few empty nesters buy similar properties, and didn’t rule them out for the 20th Avenue project. But, he guessed younger house hunters would be interested in this row of townhomes.

“Typically the people buying homes like this have been younger professionals that maybe make $100,000 who put 20 percent down, work near the city and want to be close to downtown,” he said. “We’ve seen some empty nesters and young families, but probably 80 percent of the buyers are young professionals in their 30s.”

David Berton of Real Architecture is designing Truman’s project. Dawn Development will be the general contractor. The project budget should come in between $6 million and $6.5 million, including land acquisition costs, Truman said.

Truman said he’s close to securing permits for the development and hopes to break ground within a month. If everything goes according to plan, he’ll finish the first townhome in about a year.

As Truman gets ready to break ground on 20th Avenue, he’s just brought another project out of the ground a few blocks over, near 18th Avenue and Julian Street. That project will bring another 12 townhomes to the Sloan’s Lake area.

A local developer plans to repurpose…