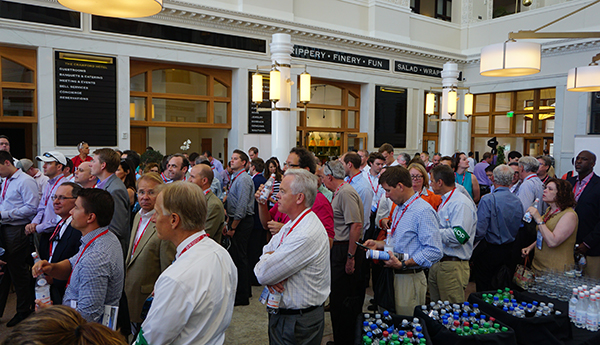 The crowd assembles in Union Station. Photos by Burl Rolett.

The building boom along the new train to DIA is about to leave the station.

More than 300 people hopped on a whistle-stop tour yesterday, put on by NAIOP Colorado and Newmark Grubb Knight Frank, of projects along the new A Line train running between Union Station and DIA.

The tour stopped at four stations along the way where developers showed off plans, then stopped at the DIA Westin hotel for a reception. 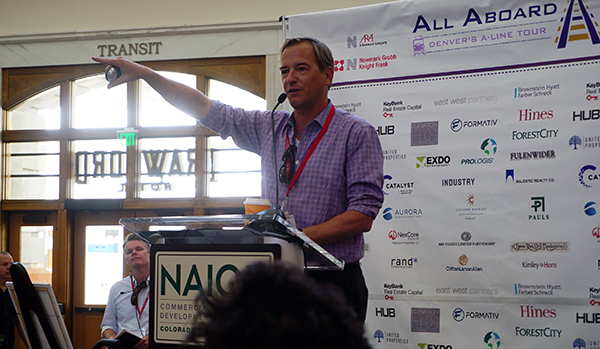 In downtown, East West Partners told a crowd at Union Station that the company was starting construction on 16 Chestnut, a 430,000-square-foot office building at 16th Street and Chestnut Place. DaVita has leased 80 percent of that building, said Chris Frampton, East West managing partner.

On the way out of town, Elevation Development Group and Formativ showed off their Hub and World Trade Center Denver projects next to RiNo’s 38th and Blake light rail stop. 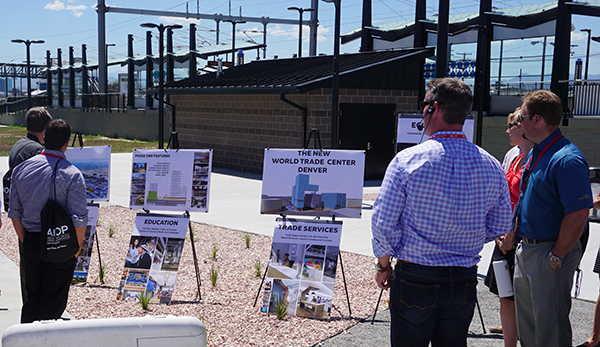 Sean Campbell pictured with his back to the camera.

Formativ, headed by Industry co-founder Sean Campbell, plans to break ground on the new World Trade Center late next year, hoping to open it in early 2019. That project’s first phase will include office space, coworking space and a new hotel. 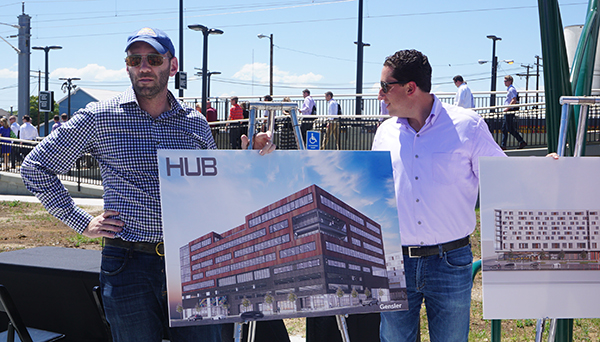 The Hub will sit at a lot bounded by Blake, Walnut, Downing and 36th streets. Brent Farber, Elevation Development Group principal, said construction will begin shortly on that development. The project will include 245,000 square feet of office space, 23,000 square feet of retail space and a 161-room hotel.

Farber said the building will have larger floorplates at about 50,000 square feet, which he hopes will appeal to bigger companies looking for larger office blocks in RiNo. He added that rental rates will be in the low $30-per-square-foot range.

The crowd assembles in Union Station. Photos by Burl Rolett.

The building boom along the new train to DIA is about to leave the station.