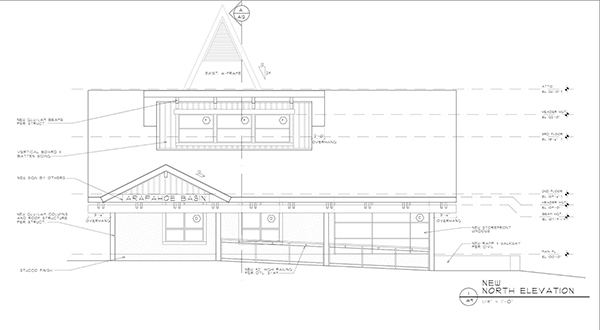 A-Basin’s A-frame lodge is getting a makeover this summer.

The Summit County ski resort is spending $1.3 million to add on to its retail store at the lodge, and improve walkways and other features at the mountain’s base. The construction will expand the store from roughly 700 to 1,800 square feet on the lodge’s north side.

“This is going to be a lot better,” said Alan Henceroth, chief operating officer at Arapahoe Basin.  “It will give people more space to shop. It will allow us to merchandise all our products that we sell in there better.”

In addition to expanding Arapahoe Sports, the mountain’s retail and gear shop, Arapahoe Basin will remodel its lodge’s entrance and freshen up the building’s facade. The lodge will get a new, European-style stucco exterior with wood accents, Henceroth said, making it match other recently renovated buildings at Arapahoe Basin.

“I think this is a last big piece that is really going to bring it all together,” Henceroth said.

Arapahoe Basin also will improve the plaza just outside of the lodge this summer, adding updated walkways, stairways and accessibility ramps as well as more outdoor seating.

Sunrise Construction Services is the general contractor at A-Basin this summer. The plan is to complete the project by the time lifts start turning again in October.

Two-thirds of the project’s $1.3 million budget will fund the lodge expansion and renovation, and the other one-third will pay for the upgraded plaza.

Arapahoe Basin is owned by Dundee Resort Development, which bought the ski mountain from Vail Resorts in 1997. Since then, the mountain has more than doubled in skiable acres with the addition of Montezuma Bowl in 2007.

This summer’s project is the last piece of a long-term, $10 million development plan A-Basin started in 2007. It included adding the children’s center, the 6th Alley Bar and Grill, and a stage for music events. Last summer, A-Basin also renovated its guest services building.

“We had a couple old buildings where it was just time for them to go and we really wanted to replace them with good things,” Henceroth said.

A-Basin’s A-frame lodge is getting a makeover this summer.