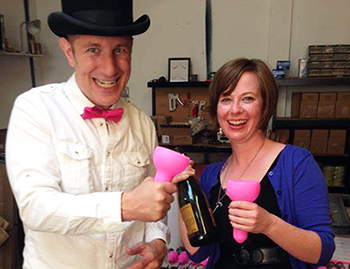 From left: Lafe Spietz and Megan Sumner. Photo used with permission from Facebook.

Boulder Applied Physics, which sold adult play things under the brand name Orgasmatronics, was the four-year startup dalliance of a Yale Ph.D. physicist, a web designer and a medical researcher.

But the trio scrapped its experiment last week: Orgasmatronics filed for Chapter 7 bankruptcy in Denver on May 31, with $55,000 in debt. And like so many breakups, it’s not clear who or what is to blame.

Orgasmatronics was founded in 2012 after physicist Lafe Spietz started designing a mechanical massager at the request of his wife, who wanted a cheaper alternative to a thousand-dollar sex toy.

Spietz (working under the name Dr. X. Treme) then hooked up with Sondra Eisenstat (aka Alexandra Ars), a jewelry and web designer friend, to start making early versions of the gadget. Sumner, then a hematologist at the University of Colorado, joined full time a few months later.

Working in a warehouse steps from Coors Field, the three assembled (among other gizmos) a patented “high torque personal massager” and a device that vibrates in response to pressure.

But banks were wary to loan money to “the industry we were in,” Sumner said, so Orgasmatronics tried crowdfunding instead. In July 2014, the company raised $67,000 through one IndieGogo project – twice its minimum funding goal – and sold over 200 toys.

Product starter kits retailed for between $175 and $300, according to the crowdfunding campaign.

But Sumner said the company had trouble paying minimum orders for the products’ building blocks, many of them sourced from China using the website Alibaba.

And while the business plan was undressed and decoded in magazine articles by Playboy and Wired, Sumner said they never had a big marketing budget.

At the end of April, Orgasmatronics decided to hang up its vibrators for good, thanking its email subscribers for supporting “explorations in touch responsive dildology” and listing its office in the Bakery Arts Warehouse at 2132 Market St. on Craigslist.

As for assets, Orgasmatronics said it sold out its inventory on Twitter and told the court it had just $100 in personal property left over.

Sumner said Spietz has returned to physics and Eisenstat is back doing design work. Sumner is working at a resort in Missouri and said she’s done with experimentation, at least when it comes to starting a company.

“As far as startups go, I might have had my taste and that was enough for me,” she said. “We tried to do a little bit too much too fast.” 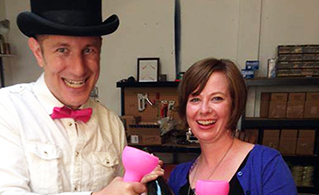 From left: Lafe Spietz and Megan Sumner. Photo used with permission from Facebook.

Boulder Applied Physics, which sold adult play things under the brand name Orgasmatronics, was the four-year startup dalliance of a Yale Ph.D. physicist, a web designer and a medical researcher.