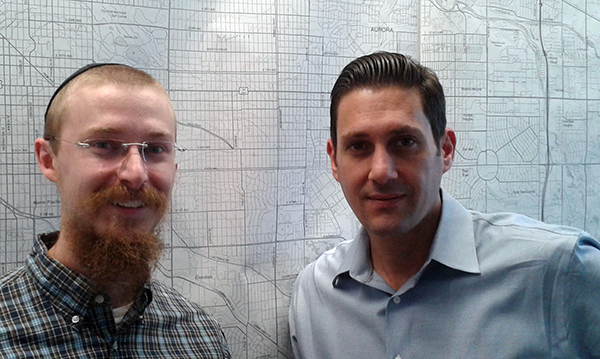 It’s tough to build a condo tower from home.

“A lot of the time we’re meeting our consultants out of the office, or at their office,” Levitt said. “But it was getting difficult to manage with three people in three home offices in two states.”

NAVA is the first office tenant to move into 1601 Wewatta St., a 300,000-square-foot office building developed by Hines and Jordon Perlmutter & Co. The company has 2,121 square feet on the eighth floor.

Law firm Hogan Lovells, the building’s anchor tenant, will move in this summer and the Colorado Athletic Club already is open on the second floor.

NAVA started searching for office space 1 1/2 years ago. The developers looked at space at Colorado Boulevard and Yale Avenue, nearer to where both Hines and Levitt live, but decided they would be spending most of their time downtown either way.

“We made a map of everybody that we do business with regularly,” Hines said. “And almost everybody works downtown.”

Gensler designed NAVA’s new office space. Urban Oaks Builders is the contractor on the office, which is partitioned by interior glass walls held together by steel beams from Corvus Design Build.

NAVA launched about three years ago. Levitt and Hines live in Denver, while Larsen is relocating from Phoenix.

The company has done a retail development in Frisco whose tenants include Natural Grocers, Starbucks and Which Wich.

In Denver, NAVA is focusing on condo development. The company has plans for a 12-story condo building at the St. Anthony’s redevelopment site in Sloan’s Lake. That property was rezoned to allow the development last year, but still faces a challenge from neighborhood groups claiming it’s too tall.

NAVA also has a site at 575 E. 20th Ave. in Uptown Denver under contract for another condominium development. The plan is to offer smaller units at a lower price to complement the bigger, fancier condos NAVA plans to build at Sloan’s Lake.

“We think that will sell fast, because it will be appealing to young buyers,” Hines said. “And everything is in walking distance of that location.”