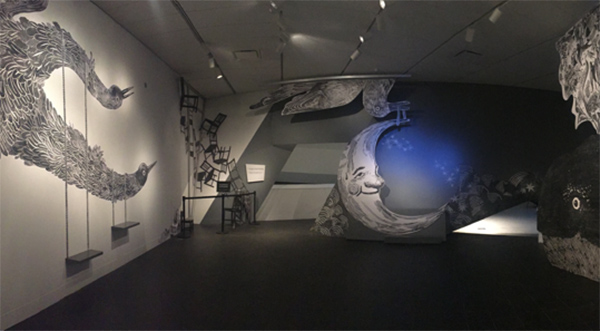 The artist behind RiNo’s rhino charged into the Denver Art Museum (DAM) this month.

The iconic horned mascot does not appear in “Tableau,” an installation by Denver native Hadley Hooper that’s featured in the Hamilton Building through March 2017. But it does include exhibits as varied as a 26-foot-long whale and birds that can lift the moon.

“Tableau” is Hooper’s first exhibit at the DAM – but, technically, her art has appeared there before.

Hooper grew up to become a partner in Ironton Studios, which rents studio space for artists at 36th and Chestnut streets. And about 10 years ago, she co-founded The River North Art District with fellow artist Tracy Weil.

These days, Hooper works mostly as an illustrator. Her work has appeared in The New York Times, on Einstein Bros Bagel packaging and in Goodwin Fine Art, a gallery just down the street from the DAM.

But last year, Hooper found her way back into the museum. A children’s book she illustrated about Henri Matisse slipped into the DAM’s gift shop during an exhibit of the French impressionist’s work.

It caught the curators’ attention and after some due diligence, they invited her to do this installation in a nook called the Precourt Family Discovery Hall.

DAM gave her a budget for the project and helped her to put it together, Hooper said, but otherwise didn’t “prescribe anything” about what creative direction the installation should take.

Starting with drawings, Hooper eventually printed 500 30-by-35-foot images, which she and a group of friends pasted onto the museum’s tilted walls or flat wood like in a stage set.

“It was a bit of a jigsaw puzzle,” she said.

Visitors can sit in a boat inside of a whale or ask an onlooker to take their portrait in front of a set of birds lifting a wooden moon. It’s a rare place in the museum where people are invited to touch the art, Hooper said, just outside a lounge for families.

“If it can survive a free Saturday, it’s good,” she said.

The artist behind RiNo’s rhino charged into the Denver Art Museum (DAM) this month.