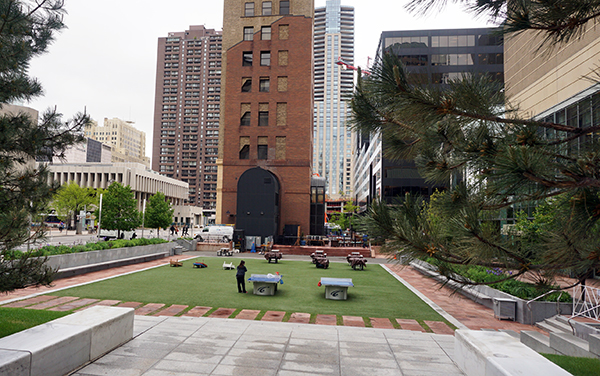 Oktoberfest might come to the 16th Street Mall a few months early this year.

Fred Weiss, director of finance and administration for Denver Parks and Recreation, said the idea is to get year-round visitors to the 16th Street Mall park.

“The plan is to sort of alternate between the ice skating rink and the beer garden,” Weiss said. “We did a lot of surveys last year and the resounding input was people wanted more opportunities for food and beverage in our parks.”

The partnership’s plan is to open a food and beverage service next to the May D&F Clocktower near the corner of 16th and Arapahoe streets. The Skyline Park skating rink operates in that area in winter.

Weiss said the deal would allow the partnership to operate the outdoor beer garden seven days a week and allow contracts with other groups to operate the venue.

The partnership plans to call in the Lowry Beer Garden and Lannie’s Clocktower Cabaret to help run the beer garden, according to a presentation included in the agenda packet for today’s Infrastructure and Culture Committee meeting.

A map of the proposed beer garden also shows a covered seating section, two areas for games and a stage.

If everything goes according to plan, the beer garden would open in July and close near the beginning of November. For 2017 and 2018, it would open in the middle of April.

The skating rink will operate from November to the beginning of March.

Skyline Park covers about three half-blocks along Arapahoe Street between 15th and 18th streets. The beer garden will take up the middle block bounded by Arapahoe, 16th and 17th streets. The partnership declined to comment on the beer garden plans, pending Denver City Council action.

Weiss said that while the agreement could have taps flowing at Skyline Park as many as seven days a week all summer, the plan aims to get visitors of all sorts downtown, whether or not they’re of drinking age.

“The park is still going to be open to the public regardless of whether or not anyone buys anything at the beer garden,” Weiss said. “They’re talking about some very mild kinds of concerts, entertainment and things that are very family-friendly activities on that block.”

Downtown Denver Partnership seeks to attract more year-round visitors to the park, and will get help from Lowry Beer Garden and Lannie’s Clocktower Cabaret.