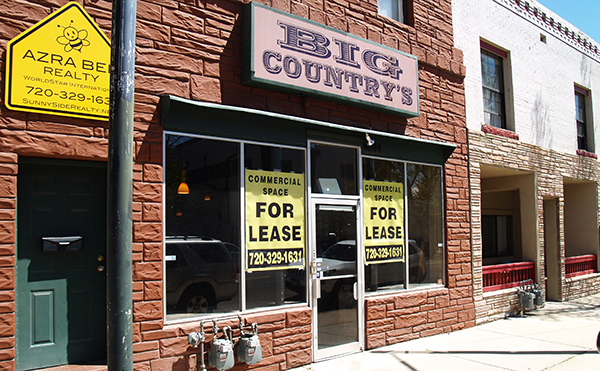 Big Country’s has closed on Tejon Street on a block undergoing lots of construction. Photo by Aaron Kremer.

“I’ve been pretty much closed since December, but I had every intention of opening back up,” owner Darren Byrd said.

Big Country Bar-B-Que at 4044 Tejon St., located near a handful of new spots, gave up its space the last week of April. The restaurant’s pork ribs, pulled chicken and beef barbeque remain available for catering, but Byrd said he is not planning another restaurant.

He said multiple factors contributed to the closing, including an injury that left him unable to work as easily as before. Byrd also said the building needed repairs.

Byrd said in hindsight, he would have waited to transition from the food truck to a restaurant.

“The transition from the food truck to the brick and mortar was kind of out of necessity because we’d lost our commissary kitchen and I had to scramble to get another place,” he said. “We should have just waited to get a liquor license, but we didn’t. And I had a really busy summer with catering.”

Byrd said the neighborhood, home to more than a dozen local restaurants, was mostly supportive.

“I feel like it’s a really tough time to be in the restaurant business in Denver,” he said. “The scene is thriving, but we just didn’t have enough capital when we started.”

Byrd is hunting for kitchen space for his catering operation.

“I have kitchen space I can use if I need to, but I’m trying to find something a little more permanent,” he said. “I won’t be opening a restaurant any time soon.”

Big Country’s has closed on Tejon Street on a block undergoing lots of construction. Photo by Aaron Kremer.