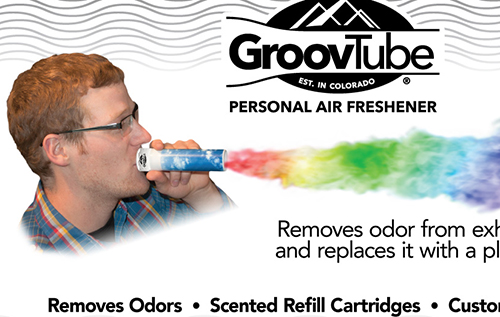 For three local entrepreneurs, a product invented to help marijuana smokers keep the smell down is no pipe dream.

Denver-based Elevated Products started selling GroovTubes, a 6-inch-long tube that filters air as a user exhales smoke into it, in October 2015. It plans to release a 2-inch version this spring.

But co-founder Nino Pero, 43, said the miniature version of the cylindrical air freshener, just $10 compared to $25 for the original, is one way to reach less-frequent cannabis and cigarette smokers.

“One way to get a lower barrier to entry is a smaller product that doesn’t cost as much to produce,” he said. “Once someone gets into it, they can buy the original for more regular use.”

And, he added, the smaller model is easier to tuck into a pocket and bring to a friend’s house.

To develop and manufacture the mini GroovTube, Elevated Products borrowed $50,000, according to a filing with the SEC on April 14.

Pero, a graphic designer by trade, started sketching what would become GroovTube in 2013, just as his childhood friend Jason Bagley, 43, was searching for a way to smoke in his apartment without bothering his neighbors when the smell wafted to another unit.

“We’re talking about something that’s completely legal now,” Bagley said. “So no one’s doing anything wrong, but you can still disturb people. Our whole idea was this: We’re not a bunch of high-schoolers living in our mom’s basement, so how do we adapt this product for a more adult lifestyle?”

Pero and Bagley then teamed up with a third business partner, Kim Eckhout, and launched Elevated Products in 2014. The original now is sold in more than 100 stores, Pero said, including a variety of record stores, smoke shops and other retailers, according to the company’s website.

The cartridge Pero fashioned combines a mechanical filter that catches the largest smoke particles, a carbon-based filter that absorbs smaller particles and a scent.

Filter cartridges last two months or 200 blows each depending on use, Pero said. In the full-sized model, customers can refill the tubes with lavender, peach and cinnamon-scented cartridges for $15 each or decorate tubes with wraps made out of the same material as window clings for $8 each.

Elevated Products also can make customized wraps with a logo for a given dispensary or as an event favor, Pero added, but the miniature model does not have changeable filters or wraps.

Pero said though he designed GroovTube primarily for smoking cannabis, he knew that the ability to filter tobacco would make the product easier to sell in states where cannabis is illegal. The product is available in 32 states.

For three local entrepreneurs, a product invented to help marijuana smokers keep the smell down is no pipe dream.