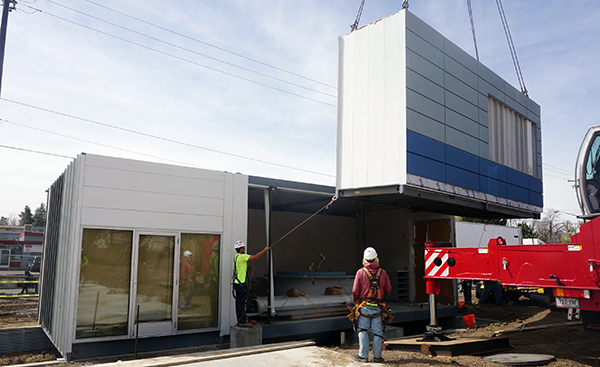 A multimillion-dollar project to clean up a Berkeley lot is falling into place.

The crane work was the first bit of vertical construction on a car-wash project Rob Madrid said would cost more than $5 million.

Madrid, who consults in the car-wash industry under the name WashGuru, co-owns Gleam with Denver developer Emilie Baratta of Turnbuckle Development. It’s the first Gleam Car Wash they’re building, and they plan to offer $5 drive-through car washes up to detail jobs costing a few hundred dollars.

The facility will include a café where customers can buy coffee, tea and kombucha with their car wash. Madrid also hopes to have roaming employees with iPads outside the building to take car-wash orders on the fly.

The Gleam team bought the property in November 2014 for $2.3 million. It was the former site of Hilario’s Mexican Restaurant. The plan since has caused a riff in the neighborhood over noise, traffic counts and parking.

Madrid hopes to mitigate those concerns with a “good neighbor agreement” he will sign with Berkeley Regis United Neighbors. That deal, he said, will require Gleam employees to park on east-west avenues instead of the more congested north-south streets.

Their cars also will have Gleam stickers on them, Madrid said, to signal to neighbors why a car might be sitting on their road for hours on end.

Gleam also will install signage at its car wash that Madrid said will funnel traffic onto 38th Avenue instead of Wolff and 38th streets. While Madrid said the good-neighbor deal will be finalized later this month, a few orange-colored “Don’t Wash Berkeley” signs still dot lawns around the Gleam site.

Littleton-based Aslan Corporation is the general contractor on the project. Collegiate Peaks bank is financing the construction.

Madrid said Gleam already has picked out two more potential car-wash locations: one in Lakewood and another in South Denver.

Those would be lease deals, he said, though Gleam would prefer to own real estate. That way, Madrid said, a deal would be easier to strike if Gleam ever decided to sell a car wash. For now, Gleam hasn’t signed any final leases on more space.

“As soon as this one gets going in June, then we’ll concentrate on some others,” Madrid said.

This is definitely a growing trend. These coffeshop car wash and detail experiences are awesome combined with the modile detailing experience as well.

Well there goes the neighborhood. It’s bad enough that houses are being torn down and new ones that are ugly colors and look like shoe boxes built in it’s place. If at least they would build the houses to look like the original ones that are still left in the neighborhood but now this car wash. Tennyson has so many bars, restuarants, brewpubs on it that it’s a shame. I guess people want drunk drivers and want to die by them. thanks