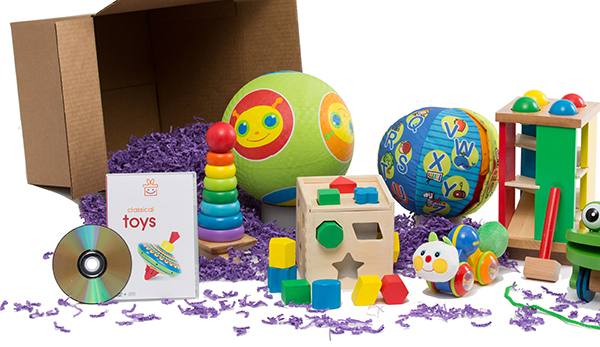 Baby Einstein has a little sister.

The founders of the childhood video series Baby Einstein, now owned by Walt Disney Co., are launching a mobile video series and toy line in May.

Julie Clark co-founded Baby Einstein and the new company, JoyBox Studios. She said JoyBox will thrive because the product is easy for harried parents to use. Through one mobile app, she said, parents can unpack a wide range of videos and play toys for their tykes.

JoyBox runs through a free app that parents can download on phones and other devices. They then can buy videos, ebooks and physical toys handpicked to match the videos. A barnyard animal video, for example, would go with a bundle of sheep, pig and cow toys that parents can buy a la carte.

The videos will cost $6 each, Clark said. JoyBox hasn’t set a price for ebooks.

The app also comes with features to help parents, including programs for tracking their child’s development and a sleep feature that automatically plays soothing music if it detects a child crying overnight.

Clark hopes to draw on the lessons she learned through Baby Einstein as she raises another startup. On the video side, for example, she’s found that babies particularly like watching slowly moving objects and detailed close-ups on a solid-colored background.

“I feel like it’s kind of our unfair advantage in the whole space,” she said of Greenwood Village-based JoyBox. “I have a really good sense of what babies love to look at and how to use that insight.”

Instead of primarily courting mom-and-pop toy stores like she did to sell Baby Einstein, Clark said JoyBox is seeking a seal of approval from “mommy bloggers”: the dads and moms whose blogs and social media accounts can reach and influence young parents.

She said the company is planning to send bloggers free samples in the hopes they’ll post favorable reviews.

“People are really looking to other people who are in the same position as them for ideas,” she said. “For us, that means trying to get our product in front of mommy bloggers.”

All of the toys, which are made by Connecticut-based company Melissa & Doug, come with a flashcard with ideas for how to play with them. The play plan for a set of stacking rings, for example, might suggest teaching a child to stack the rings from biggest to smallest, categorize them by color or wear them as bracelets.

JoyBox Studios is funding the business in part with a $1.1 million investment that it scored in spring 2015 from Denver-based Gary Community Investments. Mobile game developer Julian Farrior of Backflip Studios in Boulder also has invested in JoyBox.

The company has three full-time employees, including Clark and her husband. It hires app developers, videographers and educational consultants on a contract basis, she said.

Next year, JoyBox plans to debut a subscription program, in which people sign up to have a monthly package of toys shipped to them. But Clark said her customer hasn’t really changed, regardless of the payment model or the product.

“Babies are babies,” she said. “It doesn’t really matter if it was 20 years ago or today.”

The founders of the childhood video series Baby Einstein, now owned by Walt Disney Co., are launching a mobile video series and toy line in May.