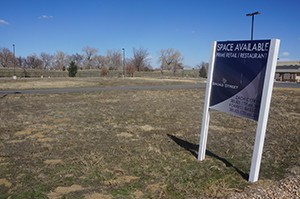 Future site of a dispensary and brewery at 14655 E. Arapahoe Rd.

In case marijuana isn’t your buzz of choice, one dispensary is trying to get beer taps flowing next door.

The owners of Denver dispensary Colorado Harvest Co. are launching a $2 million new construction project at 14655 E. Arapahoe Road that they plan to fill with their own marijuana shop and a brewery. Company co-owner Tim Cullen said he’s pushing for a brew house because his business and the beer industry share a similar clientele and there are few breweries nearby.

“If you want a Chili’s or an Applebee’s, they’re everywhere,” Cullen said. “But if you want a microbrewery with a little pub, they’re hard to find.”

Plans call for 8,000 square feet of leasable brewery and restaurant space next to a 2,500-square-foot Colorado Harvest Co. dispensary. Cullen wants to start work this spring and expects construction to take about five months. The site is on a small island of Aurora surrounded almost entirely by Centennial.

Cullen is focusing first on signing a brewery, with the restaurant a second priority. Broad Street Realty broker Forrest Bassett is in charge of leasing, Cullen said.

“Some breweries come with the other side, and want to run the restaurant as well,” Cullen said. “So I want to keep it open to that.”

Cullen said they fell into the two projects more by circumstance than a burning desire to get into real estate development.

He wanted to open a couple of Colorado Harvest Co. dispensaries in Aurora, but ran into a bureaucratic snag.

Aurora City Council approved recreational cannabis sales in 2014, and those seeking licenses to sell marijuana in the city started looking for storefront sites. But Aurora also required potential marijuana sellers to secure a location before they could apply for licenses. With no guarantee that Colorado Harvest Co. would be granted an Aurora license, Cullen couldn’t find a landlord to lease him space for a business that might not open.

Culled said he tried to negotiate leases that would give Colorado Harvest Co. a way out in case it couldn’t get a license to sell.

“Exactly zero people bit on that deal,” he said. “And from a landlord’s perspective, I don’t blame them at all.” 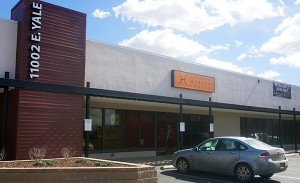 Colorado Harvest in a strip center on Yale.

So Colorado Harvest Co. decided buying real estate would be the only way to push its application process. Cullen settled on a rundown strip mall at Parker Road and Yale Avenue, plus the vacant chunk of Arapahoe Road land.

He put the properties under contract with closing contingent on Colorado Harvest Co. receiving Aurora’s approval to operate its dispensaries. The land deals, both valued at about $1 million, closed in late 2014, Arapahoe County records show.

Cullen pumped another $700,000 into renovations on the Yale Avenue building, he said. That site is operating and Cullen has three more storefronts to lease out. He said he’s in negotiations with a coffee shop and a prepackaged food distributor, with space listing at about $20 per square foot per year.

Now Cullen is focusing on the Arapahoe Road site. Short and Brennan Architects designed the building and Reconstruction Experts is the general contractor.

Though the building is set up for a brewery and restaurant, Cullen said he may end up stripping down the project to a more generic shell to house an office or retail project.

Make no mistake — Cullen wants a brewery. He’s even willing to buy the brewing equipment to get one.

But his construction loan is lined up for a real estate development that calls for signed leases – whether from a brewery or an office tenant — before the funds will be released.

While the real estate development is financed, Cullen said his marijuana business had to put down cash to buy the land. With money already in the ground, the most pressing concern is getting a building out of it so he can open a dispensary.

“I want a brewery in there, but it’s a balance of running around looking for what I want vs. what I need,” Cullen said. “And what I need to do is get Colorado Harvest Co. running.”

Future site of a dispensary and brewery at 14655 E. Arapahoe Rd.

The owners of Denver dispensary Colorado Harvest Co. are launching a $2 million new construction project at 14655 E. Arapahoe Road that they plan to fill with their own marijuana shop and a brewery.