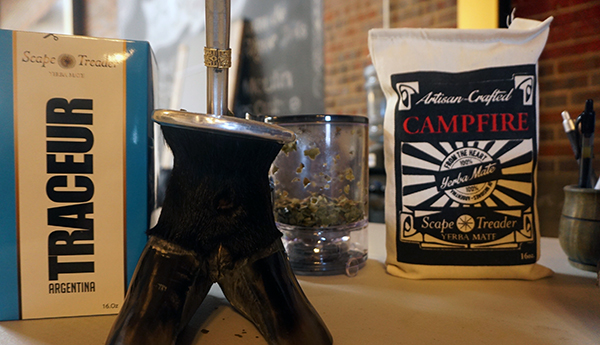 RiNo’s newest tea shop will have you bouncing off the walls.

Scape Treader Dwelling founders Christopher May and Andrew Mino are bringing a new beverage from the Argentinean rainforest – yerba mate — to Denver’s coffee mecca when they open their shop this spring.

They’re combining the exotic drink with a gym dedicated to parkour, a form of movement that involves running, flipping and jumping over obstacles.

The end result, they hope, will flip RiNo on its head.

“We wanted to move into RiNo because it’s an artsy neighborhood – people will be accepting of this fusion of cultures and ideas here,” May said. “There are a lot of places around RiNo that sell unique and small-batch items, so we thought this was the perfect place for us.”

May said he and Mino are investing $150,000 in the project. Around $75,000 will go towards building the Scape Treader Dwelling, including designing the interior, kitchen and parkour gym.

Scape Treader’s baristas will double as parkour teachers, May said. Like any gym, members will be able to take single classes or buy monthly parkour memberships, which cost $150, May said.

The café’s signature item is yerba mate, a tea made from herbs grown in Argentina. Aside from the traditional tea, May said he and Mino are brainstorming ideas for fusion drinks, such as yerba mate mixed with sparkling lemonade or citrus flavors. Beer and wine (but no liquor) also will be on the beverage menu.

“Oreos for breakfast is a common thing in Argentina,” he said.

May also is spending $17,000 on the building’s sound system, he said, and hopes to host live music events and after-hours parties.

May discovered a love for yerba mate during three visits to Argentina during the late 1990s and 2000s. The Colorado Springs native first traveled to South America during his time at Metropolitan State. He’s also spent extensive time in Argentina the last two years to organize Scape Treader’s yerba mate supply lines, he said.

Prior to founding Scape Treader, May worked as a curator for the International Experimental Cinema Exposition, a film festival based in Colorado Springs.

The Scape Treader will open in mid-March.

RiNo’s newest tea shop will have you bouncing off…