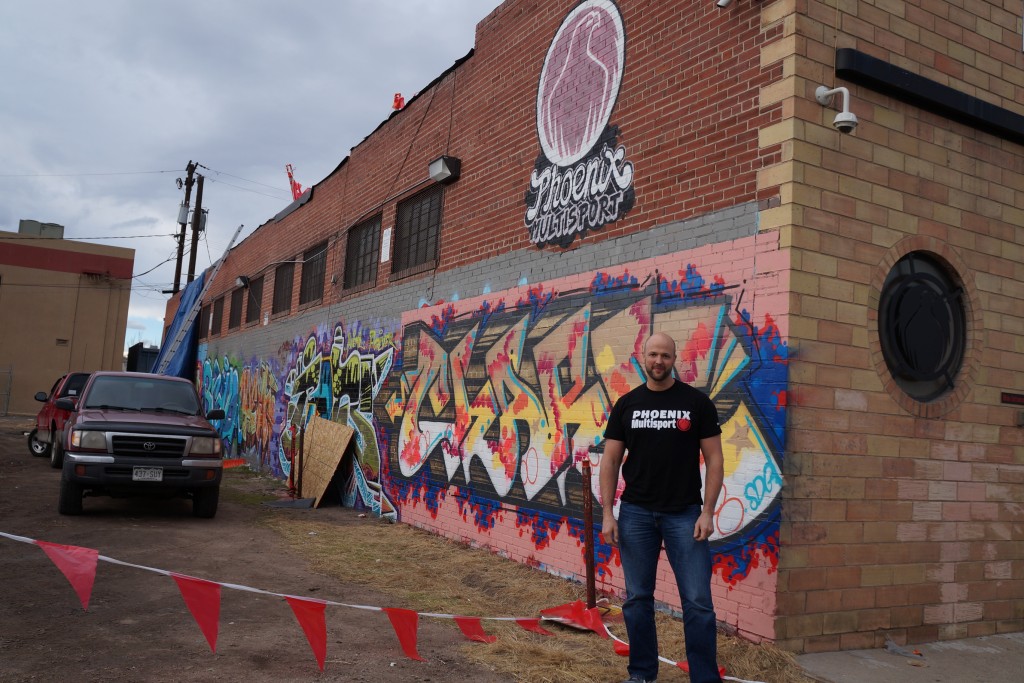 Scott Strode is adding a new revenue stream to his nonprofit through a Champa Street CrossFit gym. Photos by Amy DiPierro.

A CrossFit gym is rising from the ashes of an abandoned printing plant in Five Points as part of a million-dollar transformation by the nonprofit next door.

Phoenix Multisport, a nonprofit that provides free fitness training for people recovering from drug and alcohol addiction, is building a CrossFit gym on the lot next door to its 2239 Champa St. location.

The expansion will let Phoenix balance its finances without leaving behind locals that frequent the nonprofit gym, founder Scott Strode said. When construction wraps this summer, Strode will run a CrossFit with paying members to subsidize the free Phoenix workouts for recovering addicts.

“We wanted to find a more sustainable revenue stream and we wanted it to be right for us,” Strode said. “We thought: Would our trainers be better at running a gala – which we do – or would they be better at inspiring people to be better, which is what they do every day in our classes?” 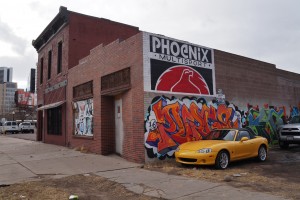 Phoenix Multisport will renovate a building next door to its current gym.

Phoenix bought a 2,600-square-foot building on about a 0.2-acre plot of land right next to the Champa Street facility to build its new gym. The deal closed over the summer and Phoenix paid $750,000 for the lot, city records show.

The nonprofit raised $1 million to buy the land and renovate the site next door, with the single largest contribution being a $500,000 grant from the Daniels Fund. Phoenix is still looking to raise another $35,000 for the project.

Phoenix runs 50 programs a week in its current 5,600-square-foot gym, including both heart-pumping, high-intensity boxing workouts and relaxing meditation sessions.

The goal is to fill a gap for people that have left addiction treatment programs and are trying to stay clean and sober. Anyone who has spent the last 48 hours substance-free is welcome to join a class.

To cover daily operations, Phoenix relies on a combination of federal and foundation grants, as well as individual donors. Addiction treatment centers also hire Phoenix to host fitness classes for their clients.

If all goes according to schedule, the new Champa Street addition will open to the public June 1. The Studio Architecture designed renovations to the 2,600-square-foot building and its surrounding lot, which will be turned into an outdoor basketball court.

Phoenix has yet to hire a general contractor. While it goes through a bidding process to find one, Strode has enlisted gym guests and trainers to do a “concrete pouring workout” to get a head start.

In 1997, Strode quit his own drug and alcohol addictions by joining a Boston boxing club. He founded the first Phoenix in Boulder a decade later and has recently opened a gym back where he started: the fifth Phoenix made its Boston debut two months ago.

The other Phoenix Multisport gyms are in Colorado Springs and Orange County, California.

Strode is hoping Boston won’t be his last stop. If paid classes can defray the costs of free services in Denver, that could beef up his pitch to other cities.

Treatment centers and nonprofits send their clients to Phoenix Multisport classes include:

Scott Strode is adding a new revenue stream to his nonprofit through a Champa Street CrossFit gym. Photos by Amy DiPierro.