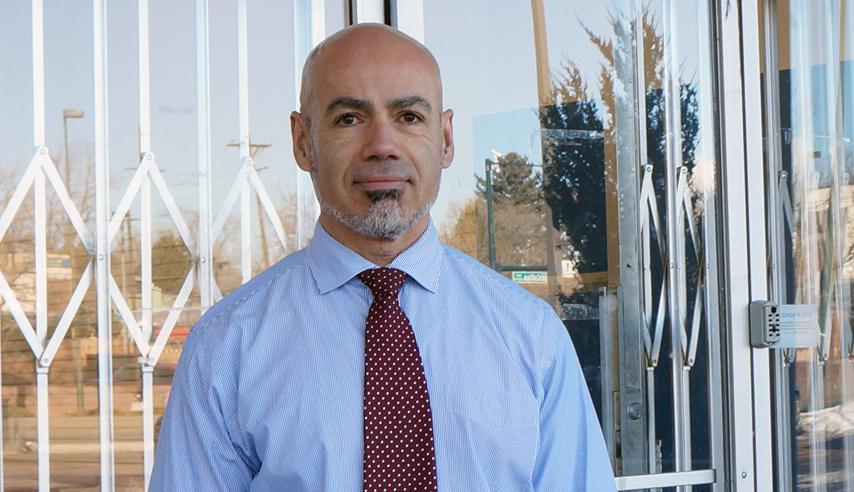 Darrell Vigil, CEO of the Colorado Health Network, is moving his nonprofit into a new space. Photos by Amy DiPierro.

A nonprofit that helps people with HIV find consistent healthcare and housing, as well as answers STD questions answered by a counselor will soon have a new home of its own closer to its patients.

The Colorado Health Network, which does business as the Colorado AIDS Project, said its services will be more accessible to clients living with HIV at its new location at 6260 E. Colfax Ave.

“For 10 years, we’ve been operating in a place that is not a great location for our clients to access,” Vigil said. “Moving is also a way to operate more efficiently, both for our clients and for us. They can go see their case manager and then go to the oral health center and the food bank.”

CHN is returning to East Colfax after a decade-long absence, he said. It now operates a food bank and case management office out of adjacent buildings in Jefferson Park and a dentist’s office in Capitol Hill.

Over the course of CHN’s 32-year history, Vigil said, the people it used to serve in Capitol Hill have shifted east toward Aurora. But he said stigma toward HIV-positive people – like office visitors afraid to touch doorknobs without latex gloves, for example – has been a constant.

“What still surprises me is how many people don’t know how HIV is transmitted,” Vigil said. “Stigma with HIV has always been an issue and it still is.”

Visitors to Colorado Health Network locations can access medical services including psychological care, as well as social services like housing and financial assistance. The company currently has about 90 employees statewide, Vigil said, including 45 full-time workers in Denver.

CHN purchased 6260 E. Colfax Ave. in May for $1.8 million, property records show. Vigil said the nonprofit raised three-quarters of its $5.9 million moving and renovation budget. That includes a $100,000 grant from the Boettcher Foundation announced last week.

The building, an auto dealership built in 1952, was most recently home to the St. Vincent De Paul Society thrift store. Across two floors and a mezzanine, the space will total 24,000 square feet when renovations are complete, Vigil said.

Charles Jordy of Jordy Construction will be the general contractor on the project, and Mark Hoskin will design the renovated space.

In 2013, the nonprofit generated $11 million in revenue and spent $1.38 million on land, buildings and equipment, according to tax filings. Vigil estimated that owning rather than leasing will save the organization $2 million in the next 10 years.

As program needs change, he said, he hopes to rent space to doctors, pharmacists and other businesses that could serve CHN clients.

Darrell Vigil, CEO of the Colorado Health Network, is moving his nonprofit into a new space. Photos by Amy DiPierro.