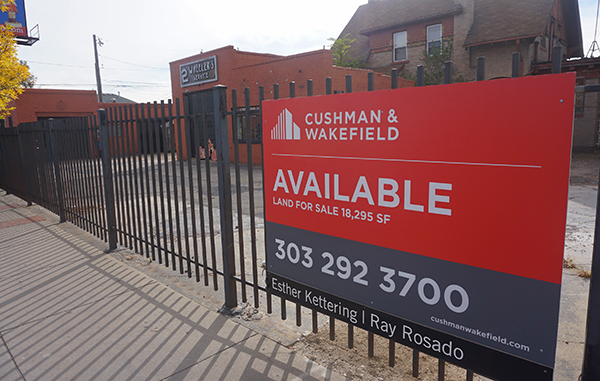 A property at 38th and Navajo has changed hands. Photos by Burl Rolett.

Rev up another 38th Avenue development near Columbus Park.

“I was told about it by a real estate broker friend of mine, and I like the neighborhood with some of the new restaurants, Sunnyside Burger Bar and Root Down,” Palmos said. “I’ve been hanging out in the Highlands for years, and when this came about we decided to purchase it.”

The deal includes an empty motorcycle maintenance shop at 3760 Navajo St. and a single-family home lot directly behind it at 3744 Navajo St. Northstar Bank financed the Palmos Development land buy.

Palmos said he hopes to start construction on the project in the first half of 2016. The 38th Avenue-fronting parcel is zoned for up to three stories of commercial development.

Cushman & Wakefield brokers Esther Kettering and Ray Rosado represented the seller. Kettering said they tried once to sell the property between 2010 and 2013, took it off the market for a brief period and relisted it at the beginning of this year. 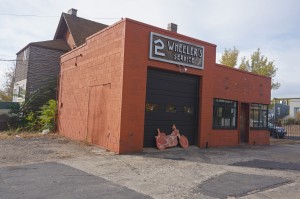 The 2Wheelers motorcycle shop has consolidated into one building.

The property drew five offers in its second run on the market, Kettering said. Qualifying potential buyers was the most difficult part of the process, she said, because the site could bring some entitlement and development challenges.

“We were in the enviable position of being able to choose the most qualified, professional and capable buyers,” she said. “I like order and predictability, and so does my client, and Terry was the best buyer.”

2Wheelers motorcycle shop was the seller in the deal. The company vacated its maintenance and repair space on the land but keeps a larger space across the street at 1433 W. 38th Ave. 2Wheelers owner Arlin Fatland said in an email exchange that the bike company will continue to operate out of that space.

Palmos Development is based out of Boulder and has been in the development business since 1971. Palmos said the company focuses mainly on the Boulder and Fort Collins area, but he is keeping an eye on 38th Avenue in case more deals come up.

Kettering said Denver’s building boom is creeping toward the 2Wheelers site, and the 38th Avenue corridor is getting in on the redevelopment run.

“The development bubble has started approaching this site,” Kettering said. “38th Avenue is awakening economically and the multifamily projects are supporting commercial development.”

A property at 38th and Navajo has changed hands. Photos by Burl Rolett.

Keeping an eye on the expanding redevelopment trend, a Boulder development firm has bought a $1.2 million lot of land for a residential and retail project.