A software startup stacked with veteran entrepreneurs announced a $2.5 million raise this month.

Swiftpage opened the round on Sept. 25 and hit its funding target, issuing $2.5 million in options, warrants or other rights to acquire securities, according to an Oct. 14 SEC filing.

The company has added email marketing and time management tools since launching in 2001. 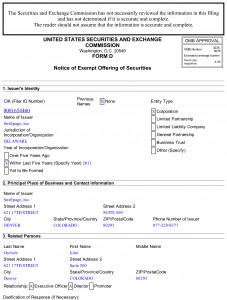 Swiftpage programs help businesses keep track of contacts, schedules, email lists and sales data. A subscription goes for $10 a month at its first tier and $25 a month for additional features, according to the company website.

Inc. magazine reported that Swiftpage has a three-year growth rate of 847 percent and 2014 revenue of $49.8 million.

Swiftpage CEO John Oechsle, previously a company board member, took his current post in July 2012. Prior to Swiftpage, Oechsle was an executive vice president at the space imagery vendor Digital Globe in Longmont and chief information officer at IHS in Englewood.

In 2013, Swiftpage bought the software suites Act and Saleslogix, both of which already used technology licensed from Swiftpage, from the multinational enterprise software company Sage. Swiftpage later divested of Saleslogix, according to the company website.

A software startup stacked with veteran entrepreneurs announced a $2.5 million raise this month.

Swiftpage opened the round on Sept. 25 and hit its funding target, issuing $2.5 million…