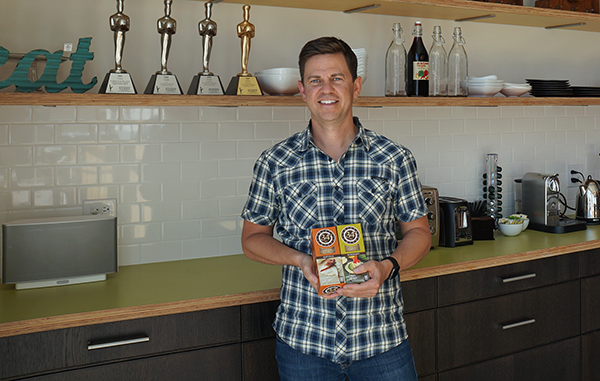 Craig Leiberman is expanding his cracker company and moving out of the Taxi development. Photo by Amy DiPierro.

A Denver-based cracker company is spreading into a new office.

After eight years at Taxi in RiNo, 34 Degrees is expanding into a 5,040-square-foot converted warehouse at 2825 Larimer St. The company will use the space to host events and ship samples to clients, said founder Craig Lieberman.

“Community, sharing, gathering – those are really important parts of our business, so we wanted our space to reflect that,” said Lieberman, 44. “We love being able to have a retail presence, even if we’re not actually doing retail.”

They won’t be baking or selling the crackers on-site, but the new space has a full wall of storefront windows along Larimer. Since 34 Degrees moved in early September, the company has set up a kitchen, outdoor deck and artificial turf-carpeted seating area within view of passers-by.

The space will host events with other food businesses in the neighborhood making wines, ciders or coffees to go with 34 Degrees crackers, Lieberman said.

“We’re all about complementing other things, rather than detracting from them,” Lieberman said. “No other crisps like this are made in the U.S.”

And the crisps weren’t originally made in the U.S. at all. Lieberman first caught onto the product while living in Australia. After moving back to the United States, he said he had noticed Australian wine becoming more and more popular stateside.

Lieberman launched 34 Degrees in 2003 as a food importer supplying foods to pair with wine, primarily Australian cheeses. But it was the thin Australian crisps he imported for cheese samples that were the real hit.

Today, seven flavors of crackers retail for between $4 and $5 per box and are sold in about 7,500 stores in all 50 states and Canada, Lieberman said. Some of its biggest retailers are Kroger, Whole Foods and Costco.

Last year, 34 Degrees made $10 million in revenue, Lieberman said, and it’s on track to grow that figure by 30 percent this year. Lieberman remains full owner of the company.

Lieberman has nine employees including six in Denver, and plans to add two more Denver workers by year-end.

As it settles into its new office, 34 Degrees is cracking into its busy season as retailers make holiday preorders from August to November. That means Fresca Foods is cooking crackers for 20 hours a day, six days a week to keep up.

But after the holiday cracker crush is through, Lieberman said, they’ll have more time to focus on monthly events in their new event space.

“A cracker can make or break a cheese,” he said. “We’re a great supporting cast, so we want to support this great community around us.”

Craig Leiberman is expanding his cracker company and moving out of the Taxi development. Photo by Amy DiPierro.

The snacks often served as a side dish to wine and cheese are now front and center on Larimer Street after a local cracker company expanded in search of a more visible presence and foodie event space.