A Denver motorcycle shop is buying itself another 35,000 square feet for its leather, chrome and bike parts.

Performance Cycle is revving up a major expansion with a new 60,000-square-foot store along South Fulton Street near Dry Creek. It’s a $7.5 million motorcycle gear superstore that company President Don Waddill hopes will become a regional bike hub when it opens in November.

“We’d like to be this total destination, where people will drive from Cheyenne or Pueblo to see us,” he said. “Kind of like the old Cabela’s, where people would drive over to Nebraska to shop.”

Performance Cycle has run its business out of 25,000 square feet at 1990 S. Broadway for the last 20 years. Waddill said the company has simply outgrown the space and started looking for a new home about three years ago.

“We outgrew the interior and parking,” Waddill said. “The business is doing well, but we would have stagnated. You get to a point where you can’t do any more with what you have.” 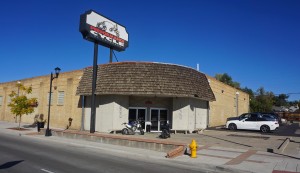 Performance Cycle will vacate its 25,000-square-foot shop on Broadway. Photo by Burl Rolett.

At first Waddill was eyeing large, existing buildings along Interstate 25 that he might be able to renovate. He said there were a few “vacant K-Marts,” but they were tucked away in neighborhoods off of the interstate, so Performance Cycle expanded its search to vacant pieces of land.

“It was an affordable space, because it was a sloping plot that maybe made it unattractive to some,” Waddill said. “It was attractive to us because we turned that slope into a sort of walk-out basement-type space.”

Performance Cycle plans to run the exact same retail business as it has at South Broadway, Waddill said, just with a lot more inventory. That means more motorcycle parts, jackets, helmets, chaps, accessories and pretty much everything but the bike itself, Waddill said.

The Mulhern Group handled the architectural work for the new Performance Cycle. Williams Construction is the general contractor. Wells Fargo is financing the building, which Waddill said would cost about $7.5 million to build.

Performance Cycle’s move will also free up 25,000 square feet of real estate at the company’s current shop at 1990 S. Broadway. Waddill, acting as Waddill Enterprises LLC, bought that building in 1994 for $537,500.

Waddill said he will either lease or sell the building once Performance Cycle moves, but he would prefer to keep it and rent it out. He’s considered subdividing it and leasing it out to smaller tenants, as well as turning it into some sort of shared office community.

Waddill said he thinks it would be a great place for a brewery but knows it would take a big-time beer maker to absorb all that space.

“It’s big and it could fit the needs of all the brewing equipment, and we have this cool interior that’s metal and wood, and that’s what those guys are looking for also,” he said. “But you would have to find a large player, a lot of the breweries are a few-thousand-square-foot deals.”