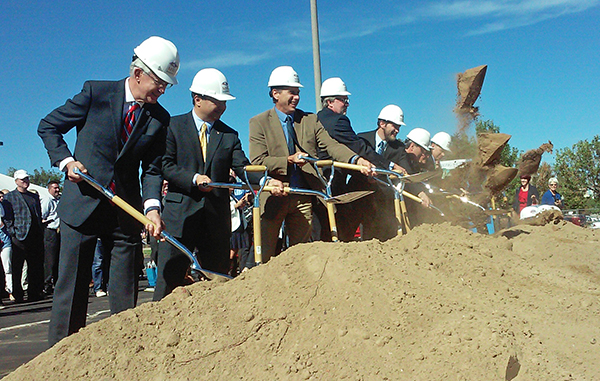 Metropolitan State University is launching a new Aerospace and Engineering Sciences building on the Auraria campus.

The $60 million project took flight Thursday morning with a ceremonial groundbreaking at the southeast corner of Seventh Street and Auraria Parkway.

When it opens in 2017, the 142,000-square -foot space will be a central terminal for students in MSU’s engineering, aviation and aerospace, industrial design, computer science and computer information systems programs.

Joan Foster, dean of the College of Letters, Arts and Sciences, said MSU often uses new real estate on campus to steer students toward fields expected to take off in the coming decades.

“We choose (new construction projects) based on academic areas that we think are a need for the community – and then the number of students in that area increases dramatically,” she said.

The number of biology students has increased by a third since the science building was renovated in 2010, she said, and enrollment in the hospitality, tourism and events program has nearly doubled since the Hotel and Hospitality Learning Center and SpringHill Suites by Marriott hotel opened in 2012.

“When students see a new building,” Foster said, “they flock to them.”

Sandra Haynes, dean of the College of Professional Studies, said that both the Aerospace and Engineering Sciences building and a new major in advanced manufacturing sciences starting this fall will help feed local demand for skilled manufacturing workers.

“(Advanced manufacturing) is pretty important to the Colorado economy – and to the students’ economy: That (degree) leads to pretty high-paying jobs,” Haynes said.

That’s why the university is focusing on bringing companies into the classroom from the start, Foster said. Students will be working with Lockheed Martin on a prototype satellite to be hung like a chandelier. And the specialized laboratory space occupying over half the building will be stocked with 3-D printers, lathes and CNC machines donated or funded by local companies.

The general contractor and construction manager on the project is GH Phipps Construction with Anderson Mason Dale architects on design. Construction is financed in three equal parts by the state, private sector donors, and an existing student construction fund.

The new building continues a trend over the past five years, Haynes said. MSU, Community College of Denver and University of Colorado Denver are each developing their respective neighborhoods on the Auraria campus.

“The infrastructure of MSU Denver has really changed quite dramatically in the time that I’ve been here,” said Haynes, who was a student and professor at MSU before joining the administration. “But the priorities have always been there: to provide a world-class education to our students, many of whom are part of underrepresented groups.”