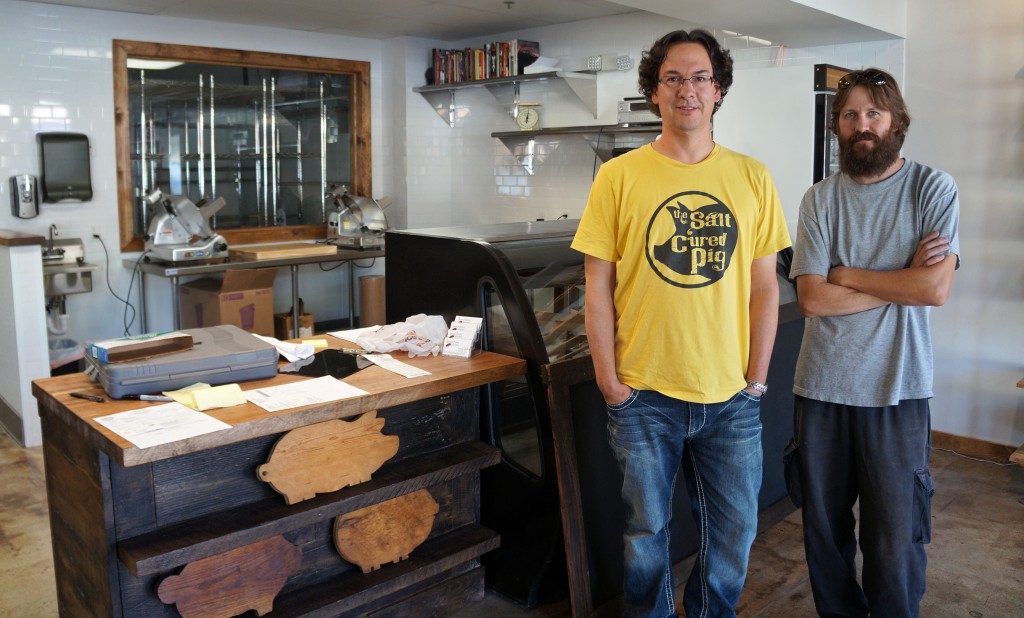 Bill Miner (left) and Brian Albano are preparing to launch their market and deli. Photos by Amy DiPierro.

Brian Albano and Bill Miner are bringing home the bacon to Berkeley.

This week, the pair get cooking at Il Porcellino Salumi, a neighborhood deli that will cure and prepare all of its own meats.

Co-owners Albano, 39, and Miner, 42, say their spot at 4334 W. 41st Ave. will be the only restaurant in town that brings in whole pigs from around the state and sells pounds of house-cured meat to customers.

“There was nowhere where the customer could come in and take it home, so we felt like having a retail space would be very unique to Denver, as well as the state of Colorado,” Miner said. “Once we signed a lease, we felt having a deli here with soup, salads and sandwiches is perfect for the neighborhood.”

While there are lots of sit-down restaurants on Tennyson, neighbors along 41st and Tennyson previously had few grab-and-go options, Albano and Miner said.

The pair met while both were working at Relish Catering & Events in Lakewood. Albano started curing meats as a hobby, turning an old, unused freezer at Relish into a “curing cave” for whole-muscle hams and andouille sausages.

With positive feedback from friends, Albano and Miner got serious about starting a shop together.

Il Porcellino signed its lease on the space about six months ago. The spot had previously been home to Tennyson Hardware, a neighborhood staple that closed in April 2014 after decades in operation.

The two friends spent those months adding a curing chamber filled with metal racks, a step up from the converted freezer that started it all.

To make the most of the meat they’ll cure there, Il Porcellino is sourcing whole pigs locally. Albano especially savors heritage breeds, pure-bred pigs that have the red color or high fat content.

Il Porcellino Salumi’s next challenge is to get into a rhythm of preparing meats ahead of its opening in about three weeks.

“We never want to have an empty case. We always have to have product available for people to buy,” Miner said. “It could be as simple as mortadella, which is a quick, just day-long process.”

Bill Miner (left) and Brian Albano are preparing to launch their market and deli. Photos by Amy DiPierro.