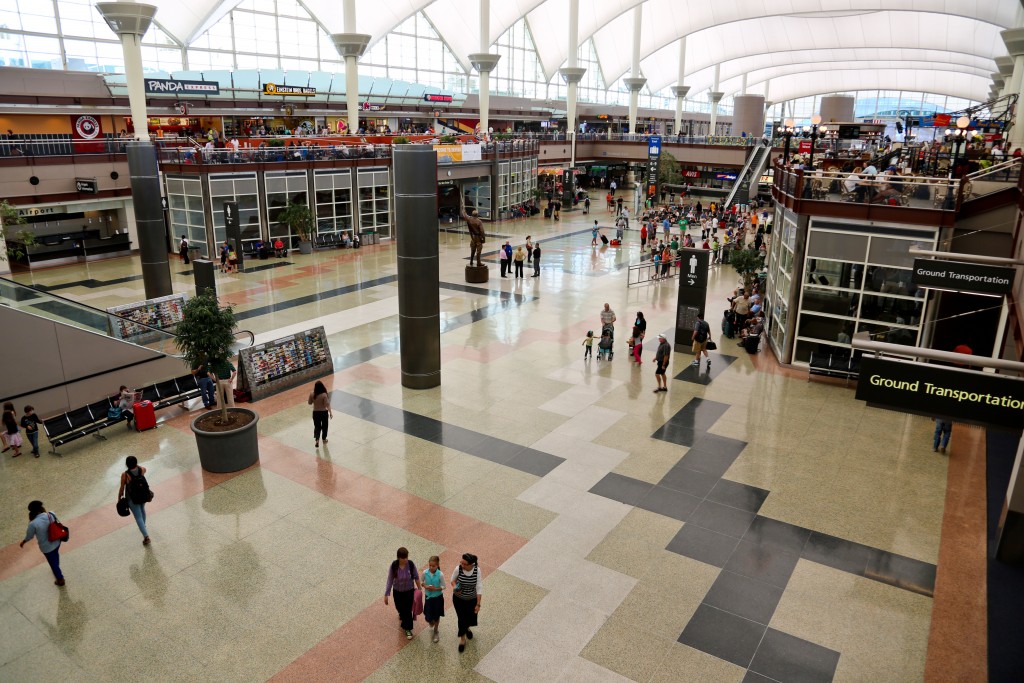 A pair of restaurants will replace sports bars in the concourses. Photos courtesy of DIA.

By next year, travelers may be able to hit a Colorado brewery before setting foot outside DIA.

DIA is looking for a 25-tap brewpub to book a spot at its brand new, half-billion dollar Westin Hotel. It’s the marquee piece of a four-venue contract DIA has in the works for a brewery, two concourse burger joints and a coffee shop.

“If there’s any place in the airport that has enough space to brew on-site, it would be this location at the Westin,” said Neil Maxfield, DIA’s senior vice president for concessions. “We like the opportunity to develop a unique brew that will only be offered here that may attract not just travelers coming through DIA but also people in the region.”

The restaurant and microbrewery will fill 7,750 square feet at the airport’s whale-shaped hotel. The deal comes with two more restaurants, both behind airport security, at Concourse B and Concourse C. Whoever takes on the brewery and the restaurants must also operate a coffee shop near the Westin, according to the proposal. 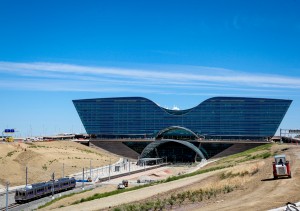 The Westin has about 520 rooms.

Maxfield said the single entity could be a concessionaire that puts together a brewer, restaurateur and coffeehouse operator, or a joint venture of local businesses teamed up to take on separate parts of the deal – as long as the proposal lands on his desk in one package.

“We have people that could probably do it all, we have some people that are well-suited to do the coffee place or the restaurant or vice versa,” he said. “We could see some people partner up, but it’s up to them how they want to form a concept, share the costs and the risks and the revenues.”

The microbrewery will be on the fifth floor of the Westin, on the same level as the Starwood Hotels’ upscale wine bar concept Grill and Vine. DIA will require the brewery to have at least 25 beers on the menu. Of those, 15 must be Colorado-brewed beers, five will be seasonal brews and two should be imports “representative of international destinations” that fly into and out of the airport, according to the RFP.

The two burger joints measure 3,573 square feet and 2,327 square feet. Their menus must have a minimum of seven “gourmet” burger varieties with at least two on a seasonal rotation made from Colorado ingredients.

The airport wants at least 10 beer taps at each restaurant. Half of those must serve Colorado beers. Maxfield said a bidder could open the same restaurant in both spots, or operate two different concepts. The restaurants will replace a pair of what Maxfield called “generic” sports bars.

“There’s a lot of making sure we’re bringing in something we’re taking away, but at a much higher-quality level,” Maxfield said. “What we’re looking to do is bring brands and concepts that people will attach a certain value to, so it will bring people through the front door.” 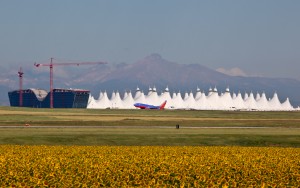 Proposals are due on the project by early next month.

The coffee shop will take up 1,262 square feet near the Westin. Specs for that business call for it to carry coffee and tea, baked goods, magazines, newspapers and non-alcoholic beverages.

The package’s winning bidder will have to sign a 10-year lease on all four spaces. The airport will require a minimum upfront investment of $600 per square foot over all four. Tallying up the brewery, restaurants and coffee shack, the winning bidder will need to pump more than $8.9 million into the project.

Operators will also have to pitch in 1 percent of revenues for the airport concessions joint marketing fund.

At least three Colorado beer giants have heard the airport’s brewery pitch. Great Divide owner Brian Dunn is on a list of project plan holders. A trio of representatives from Oskar Blues is listed on the attendance sheet for a Sept. 11 meeting.

And Sheila Gebhardt attended the session for New Belgium Brewing. She said it was primarily an informational meeting when reached by phone on Tuesday and could not comment on whether the brewery would pursue a deal.

On the restaurant side, representatives from Tavern Hospitality Group, Champa Street Burgers, Bad Daddy’s Burger Bar, Gaetano’s and the Viewhouse either attended the Sept. 11 meeting or appear on the airport’s list of plan holders.

This is at least the second time Denver International Airport has tried to lure a brewery for its new Westin hotel. Maxfield said the airport put the brewpub piece out to bid on its own but didn’t find any takers.

“It wasn’t economically viable for just one brewery to come in,” he said. “So we’ve packaged it to provide a better economic landscape for interested parties – putting all four pieces together helps spread out the risk.”

Proposals for the package are due Oct. 8. Maxfield said it will probably take four or six weeks to review each application, conduct interviews and eventually make a recommendation to send off to City Council.

If itineraries run on time, Maxfield hopes to have the brewery open by the time light rail starts running to the airport next spring. The two restaurants are a second priority, but Maxfield is expecting the winning bidder to have the restaurants open about six months after the contract comes through.

The brewery proposal is taking off as Denver International Airport’s concession program books a return trip for Chick-fil-A. Denver City Council approved an application to bring the chicken chicken joint to DIA at Monday’s council meeting, almost a month after it was delayed amid councilmember concerns about the company’s opposition to same-sex marriage.

A pair of restaurants will replace sports bars in the concourses. Photos courtesy of DIA.

The airport is scouting out potential takers on a four-venue project that would include a brewery in the Westin Hotel, two restaurants and a coffee shop.