More than 220 workers will be out jobs as a Denver-based financial firm winds down.

Curian Capital will lay off its 224 employees, 188 of them in Denver, according to a WARN Act notice the company filed this month. The notice follows a statement from the financial firm in July, when it announced plans to shut down by early 2016.

“The competitive landscape and growth rates favorably supported the launch of Curian 12 years ago,” Curian spokeswoman Melissa Hernandez said in an email. “Given the industry-wide changes in technology, product offerings and market size, Curian has determined it cannot remain commercially positioned to provide clients high-value investment programs over the long term.”

The first round of cuts will happen Sept. 1, according to the company’s WARN notice, and will comprise about 45 workers. Most of those are salespeople working in different states, and only nine Denver employees will be cut in the first phase. Curian will drop another 18 workers in December, followed by 150 in April. The company’s remaining 11 employees will be terminated around June 30, 2016. 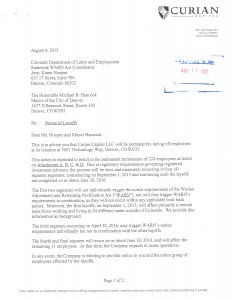 The cuts cover a wide range of jobs and include investment advisory, customer support, marketing, secretarial and research positions.

Job titles for the layoffs came from a letter submitted to the state Department of Labor and Employment in compliance with the Worker Adjustment and Retraining Notification Act. Companies are required to file WARN notices ahead of plant closings and mass layoffs.

Curian Capital offers fee-based managed investment accounts to individual investors and investment advisers. Bloomberg reported the company had about $12 billion worth of funds under management by the end of last year.

Almost immediately after Curian announced its plans to shut down, rival investment firms began jockeying to pick up a chunk of Curian’s 11-figure book of business.

Curian Capital is a subsidiary of Jackson National Life Insurance Co. and operates at Jackson’s headquarters at 7601 Technology Way in the Denver Tech Center. Wells Core Office Income REIT owns the building and reported in 2011 that it was fully leased to Jackson National Life.

Hernandez declined to comment on the company’s plans for Curian’s office space. The entire office building totals about 183,000 square feet.

More than 220 workers will be out jobs as a Denver-based financial firm winds down.