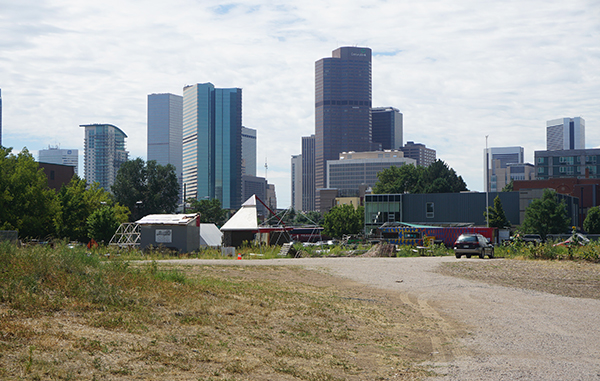 A Curtis Park block, which hosts the Big Wonderful festival in the summer, has been pitched for a home project. Photo by Burl Rolett.

Treehouse Development and Westfield Co. are teaming up to build about 100 new residences on the 2500 block of Lawrence Street. It’s the first phase of a planned two-city block project that could bring more than 220 homes for sale to the area.

“We’re really excited about where the RiNo neighborhood is going and what a great place RiNo is to be on a daily and evening basis,” Treehouse Principal Clem Rinehart said. “That’s what we’re selling here – we’re huge fans of the lifestyle in RiNo and want to provide for-sale housing options for people who feel the same way.”

Plans call for a mix of unit sizes and price points, Westfield partner Kevin McClintock said Tuesday morning at a panel discussion hosted by Colorado’s chapter of the U.S. Green Building Council. Smaller units could start in the mid-$200,000 range with larger homes reaching $600,000 or $700,000. The first phase will also include about 8,000 square feet of retail space, McClintock said.

The development group plans to buy the site from its current owner, the Denver Housing Authority. If construction moves according to schedule, Westfield and Treehouse will break ground in March of 2016, McClintock said. Rinehart said a spring 2016 groundbreaking would put the project on schedule for completion in the fall of 2017.

Jonathan Alpert of Westfield said the developers are also planning to revamp Sustainability Park, an urban garden and park that stretches from 25th Street toward the center of the block.

“Sustainability Park as it currently exists during construction will be gone, but it will come back in an enhanced version,” Alpert said. “The plan is to build a working indoor green house, as well as bring back a portion of the working farm.”

The project’s first phase will leave the block bounded by 26th, 27th, Lawrence and Arapahoe streets untouched. A second run of construction could bring another 120 or so units to that block, pushing the entire project to about 220 homes.

Rinehart said there is not yet a firm timeline for moving on that second part of the development. Tres Birds is the architect for the project. Westfield and Treehouse have yet to name a general contractor and will be looking for a bank to finance the development.

While final plans for the complex are still in flux, the project’s development team is starting to take down names for potential buyers. The first structure the developers plan to build – an information booth at The Big Wonderful weekly bazaar – goes up this weekend on the site.

“We’ll be gauging interest at that booth just really capturing contact information for people that want to be added to that interest list,” Rinehart said.

A Curtis Park block, which hosts the Big Wonderful festival in the summer, has been pitched for a home project. Photo by Burl Rolett.