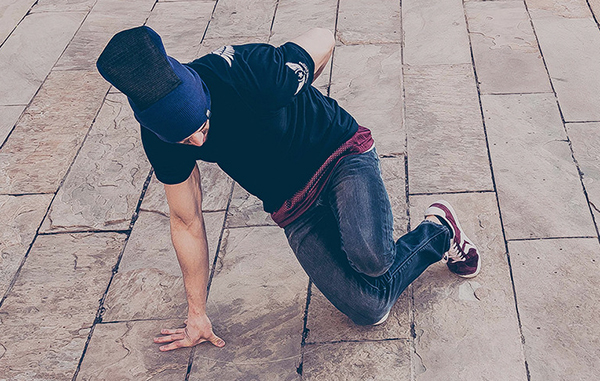 Steven Silva, 28, wants to take Generation BBoy – an online company he started in 2008 that manufactures and sells break dancing products – into his full-time jam.

Generation BBoy offers its own line of padded and unpadded head-spin beanies for $20 each. It also sells other brands of knee and elbow pads, wrist and ankle supports, T-shirts and shorts.

“Having the right gear is important to stay healthy,” Silva said. “If you just wear knee pads, you won’t hurt your knees and you can dance longer.”

Silva, a self-employed property manager, is working to improve his marketing. He wants to send regular newsletters and product offers to customers to keep them coming back. He said he hopes to focus exclusively on building the business by the end of the year.

Silva began making and selling head-spin beanies in 2008.  Three years later, he hired a manufacturer to make the products and web designer to build the online storefront. He began shipping orders across the country, but yearly revenue stayed under $40,000, he said.

This year, he said he’s on track to earn $70,000 in revenue because of the marketing push.

Silva first tried break dancing – or “breaking” – at age 12 for a middle school talent show. He continued to practice, despite the challenge of learning to spin on his head and pull off gymnastic-style moves.

“It’s harder to learn breaking than to buy real estate, that’s for sure,” he said. “It’s the hardest thing I’ve ever done. It takes a lot of persistence and discipline.”

After years of practice, Silva discovered a small community of like-minded dancers, called B-boys or B-girls. He estimates there are about 100 people, ages 15 to 30, in the Denver metro area who regularly train and compete.

“There are a lot of middle-income kids of all races,” he said. “It’s really a lot suburban kids, not just gangs anymore.”

Silva said he has seen interest in the style grow since he started dancing, a shift that has given way to more events and resources for people who want to learn and compete. He attributes the growth in popularity to movies, TV shows and online videos that highlight break dancing.

Silva has hosted about a dozen events since starting Generation BBoy. He said they typically attract about 500 people, a number that includes local dancers, their supporters and competitors from other states.

“Younger guys are coming up in a community where there’s a lot more support and a lot more people like me throwing events,” he said. “Kids today are learning a lot faster than I ever learned.”