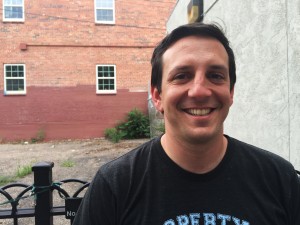 After two summers teaching Denver teens outdoor skills such as rock climbing and hiking, a new nonprofit wants to beef up its program and go year-round.

Yoni Geffen co-founded Adventure Forward after teaching high school in Denver for six years. The California native started taking students on outdoor adventures on the side of his classroom work. Then he decided to combine the two endeavors with the nonprofit.

Now he wants to launch three pilot programs during the upcoming school year that tie into academic standards such as Common Core and STEM.

“Our summer program will always be a strong component, but we want to find ways to engage with students in a more long-term, longitudinal context,” Geffen said. “We have them for three weeks in the summer, but what about the other 49 weeks of the year?”

Adventure Forward offers two summer programs that correspond with summer school sessions at participating schools. The programs, offered at low cost to the schools and no cost to the students, teach problem solving, leadership and outdoor skills through activities such as hiking, climbing and camping.

“We sit at an intersection of health and wellness and character development,” Geffen said.

During the upcoming school year, Adventure Forward will hold three month-long after-school programs in the fall, winter and spring. Geffen said the nonprofit will work with participating schools to determine which skills would best align with their curricula.

“Those are going to be unit-based programs focused on a particular skill,” Geffen said. “(Many schools) are looking for ways to develop opportunities for students to apply core values and leadership skills in a real-world context.”

Each session will cost between $15,000 and $20,000 to run, depending on how many students participate, Geffen said. Adventure Forward will work with participating schools to determine how much money each can contribute.

“We realize that schools are not necessarily going to have the capacity to pay the true cost of the program,” Geffen said. “But we’re at a place where we’ve demonstrated value, and we can’t function if we don’t have funds coming in from them.”

Right now, Adventure Forward programs are funded by donations from individuals and companies that offer their goods and services for free or at a discount, including Kent Mountain Adventure Center in Estes Park and Earth Treks climbing gym in Golden. Adventure Forward has raised about $170,000 since it launched in 2014, Geffen said.

“So far, we’ve been primarily reliant on individual gifts (because of) ease of access and the turnaround time,” he said. “As a startup that doesn’t have five years’ worth of impact data collected, it’s tough to put together a competitive application to some of the bigger grants.”

The nonprofit hires leaders to run the summer programs, and the leaders receive a $2,500 stipend at the end of the summer.

“It’s service, but it’s also a paid position,” Geffen said. “We never want the program to be (cost prohibitive) for individuals who share the racial and economic background of the students.”

“We’ve been able to drop per-person costs by upping the number of students per corps member without compromising program quality,” Geffen said.

Geffen said he hopes to ramp up funding for the programs by offering activities such as corporate team building to companies.

“Some of the best nonprofits operate with 85 percent earned income,” Geffen said. “We’re not there yet, but we’re putting tactics in place to move toward funding that will be more sustainable.”

A startup nonprofit is graduating from summer school and launching year-round programs for high schoolers that get them climbing, hiking and camping.