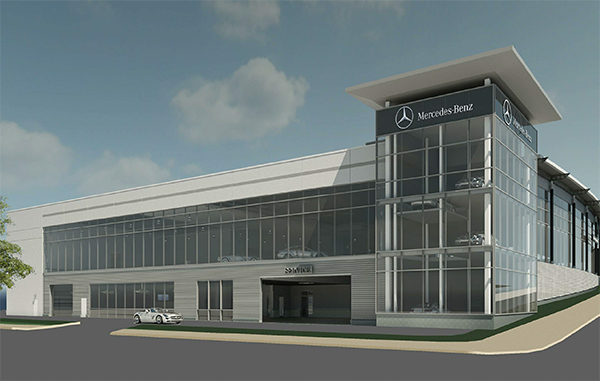 A new Mercedes-Benz dealership is in the works. Renderings courtesy of Sonic Automotive.

A North Carolina-based car dealer hopes to rev up sales of luxury brands Mercedes-Benz and BMW with a pair of scrape-and-builds that together will cost around $50 million.

Sonic Automotive is beginning demolition on a trio of dealerships with plans for brand new BMW and Mercedes-Benz dealerships in a year’s time. All told, it’s a $40 million to $50 million investment that company head Scott Smith hopes will roll twice as many German imports off the lots.

“I would be disappointed if we didn’t double our sales,” Smith said. “I think the facilities we’re building and the products in the pipeline for both Mercedes-Benz and BMW are very exciting, they’re priced very well for the U.S. market and I think they’re great values for what you get.” 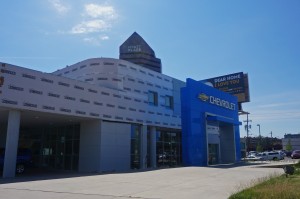 The Chevy dealership, which was shut down, will be razed and replaced with a new BMW dealership. Photo by Burl Rolett.

Each car dealership will cost between $20 million and $25 million to build, Smith said, and he said he hopes to open the new Mercedes-Benz and BMW shops next fall.

Sonic bought the dealerships at Colorado Boulevard and Kentucky Avenue 2½ years ago from Murray Motors Imports. Smith said both dealerships sell about 1,000 cars per year.

The new BMW dealership will be about 56,000 square feet and cost up to $25 million to build.

At the time, the company planned to continue running the Chevrolet dealership alongside a new BMW shop, but Smith said the real estate proved more valuable than the Chevy business.

“The property was just too small and too valuable to have both franchises on it,” Smith said, adding that there are enough people peddling Chevys in Denver. “It’s a little over-dealered, and I think this will allow the other dealers to become a little stronger.”

The new BMW dealership will total 56,507 square feet, according to building drawings, with 3,500 square feet of new car display space and room for 136 used cars on display and in storage. Both the BMW and Mercedes dealerships will have two-story showrooms.

“You really have to go to an urban market generally to go vertical like that because it’s very expensive,” Smith said.

Both the BMW and Mercedes dealerships will have their own service spaces. And Sonic will keep an existing service facility at Kentucky and Colorado. Smith said the dealerships will double their service capacity.

Sonic’s BMW outfit is the only dealer for new Bimmers in Denver, according to BMW USA’s website. Its nearest competitors are Schomp BMW of Highlands Ranch and Gebhardt BMW in Boulder. Mercedes-Benz lists new car dealerships in Westminster and Littleton.

A new Mercedes-Benz dealership is in the works. Renderings courtesy of Sonic Automotive.

A car retailer is revamping its Colorado Boulevard operations and plans to knock down three standing dealerships to build new BMW and Mercedes locations in their place.