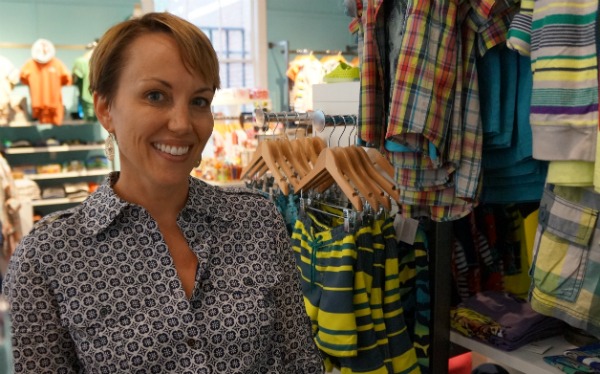 The owner of a Cherry Creek children’s boutique is moving to a bigger store and adding a new shop around the corner that will sell books and toys.

Caroline Evascu relocated her store Nest, which sells children’s garments and accessories, two blocks to 2940 E. 6th Ave. The new digs are twice as large. And the toy store, expected to open later this month, will sell books, crafts, dress-up clothes and other non-electronic toys.

Evascu said the new store will fill a need in Cherry Creek following the Wizard’s Chest’s relocation to 451 Broadway and offer a different shopping experience for parents and their brood.

“It’s going to have sort of a Montessori feel,” she said.

The new boutique’s 1,200-square-foot retail area is nearly twice the size of Nest’s former location at 2808 E. 6th Ave. The additional room enables Evascu to space out the store’s displays and expand her inventory by 30 percent, she said.

“The other store was too cramped,” she said. “For people who knew us, it was great, but for someone who was new to the store, it could be intimidating.”

Evascu said the larger area also will allow her to carry more products by the Tea Collection, a line of designer children’s clothes that has doubled its products each year since 2013. Nest is one of the only local shops that carries the brand, though some larger stores, such as Nordstrom, sell it.

“We needed more space to showcase (the line),” Evascu said. “They’ve expanded their baby line, which will be a whole new offering.”

“We found that girls that age don’t want to shop in a store that sells baby clothes,” she said. “That customer wants their own space. (Hatched) will have its own little entrance.”

Evascu, who migrated from New York City to Denver in 2007, opened Nest at 2808 E 6th Ave in 2010. She opened a second location in Boulder in 2013, about a year after she felt she outgrew the Cherry Creek space.

“We’ve been looking for a bigger space for a long time,” she said. “We wanted the store to have a similar feel to the last one, and when this space came it was a great opportunity.”

Evascu is leasing the new clothing store and the toy store. She is keeping Nest’s former space in the hope of adding another building block to her footprint in Cherry Creek, but she did not disclose what that store would be.

The owner of a Cherry Creek children’s boutique is moving to a bigger store and adding a new shop around the corner that will sell books and toys.