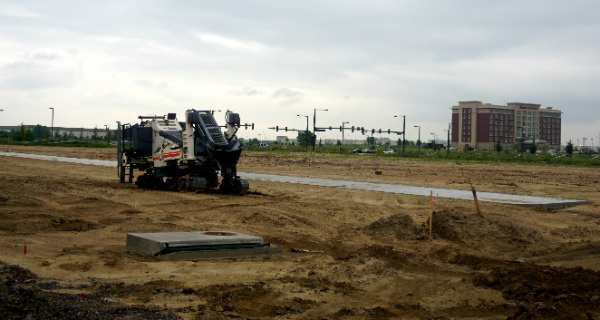 The site of a future Stapleton Residence Inn on Central Park Blvd. in Stapleton. Photo by Burl Rolett.

A year after its first venture into Stapleton, an out-of-town hotel developer is closing a reservation for 112 more rooms.

“It’s a growing area, and in general Denver is a really solid market with a diverse economy,” said Joe Blagg,Tharaldson’s development manager. “It has lots of corporate headquarters and other things we look for with an extended-stay hotel.”

Plans call for a four-story building with 112 guest rooms. Blagg said Tharaldson is working through the permitting process right now and hopes to open the new hotel in late summer or early fall of next year.

Las Vegas-based Design Cell Architecture is designing the Residence Inn and South Dakota-based Dacotah Bank is financing the project. Tharaldson’s in-house construction firm is the general contractor and the company’s own management team will operate the hotel.

The project will carry Marriott’s Residence Inn brand. The concept is similar to Staybridge Suites, an IHG hotel, and Blagg said rates at Stapleton’s Staybridge Suites and Residence Inn would average about $120 per night.
“Both brands have similar demographics, the same type of guests,” he said. “The room products and everything else is quite in line – they’re the upper-end, upper-scale extended-stay brands.”

Tharaldson Hospitality owns about 30 hotels nationwide, according to its website. The majority of those are extended-stay hotels. Blagg said the North Dakota-based developer also is working on development projects in California and New York, and is looking for more deals in the Denver area.

The Staybridge Suites at Stapleton, which opened last July, is Tharaldson’s only hotel in the Denver market. Blagg said that hotel has done slightly better in its first year than Tharaldson anticipated, but the company was bullish on Stapleton even before the Staybridge got out of the ground.

“Since really even before we were opening the Staybridge, we liked the area and the market, and worked with Forest City to identify some potential other sites for hotels,” he said. “We looked at a few Forest City had and this one made the most sense for what they wanted to do.”

The site of a future Stapleton Residence Inn on Central Park Blvd. in Stapleton. Photo by Burl Rolett.

A year after its first venture into Stapleton, an out-of-town hotel developer is closing a reservation for 112 more rooms.