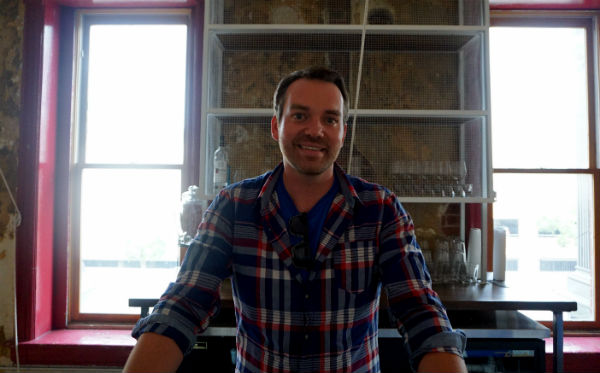 Chad Fish is opening the Fish Hostel in LoDo. Photos by George Demopoulos.

There’s something fishy going on in the top two stories of a newly remodeled building in LoDo.

Chad Fish is about to embark on his first venture in the hotel industry – a hostel he’s dubbed Hostel Fish at 1217 20th St.

“This is my first time ever opening a business and my background is not in hospitality at all,” Fish said. “I spent a lot of time over in Europe and Northern Africa and stayed in a lot of great hostels. When I came home, I was just floored that they didn’t exist around here.”

Hotel Fish had its soft opening last week and will be fully operational July 10. The two-story, 8,000-square-foot hostel is host to 67 beds and two private rooms. Beds are rented for $45 a night and the private rooms fetch between $150 and $175. 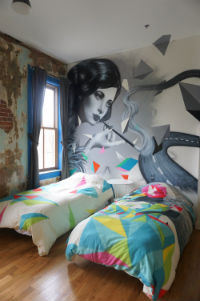 One of the rooms.

“I put together a business plan and started looking at what it would take to change the mentality around what a hostel is in the U.S,” Fish said.

He said he aims to appeal to American travelers in their 20s or early 30s.
Hotel Fish will be competing in a bigger pond. There are other hostels in Denver, such as the 11th Avenue Hotel,

“We’re an ‘upscale hostel,’ meaning very high-end,” he said. “This is for people who want a traveler’s experience, not just a cheap place to stay.”

Airbnb may present competition as well, but Fish is using the website to his advantage – he’s using it to advertise beds.

Fish has eight employees and plans to hire another four.

As a new entrepreneur, Fish said finding funding was a two-year slog.

“I pitched 33 banks and six credit unions and got ‘no’ from all of them. I don’t even know how many investors I pitched to. It’s a hostel, so it’s inherently risky.”

Fish found his financer in restaurateur Paul Tamburello, who runs Linger and Root Down. Tamburello owns the building that houses the restaurant and leases space to Fish.

The 125-year-old building has a seedy past. It was a brothel and adult bookstore in previous incarnations.

Chad Fish is opening the Fish Hostel in LoDo. Photos by George Demopoulos.

Chad Fish is about to embark on his first venture in the hotel industry – a LoDo hostel he’s dubbed Hostel Fish. And he’s using Airbnb to help book rooms.