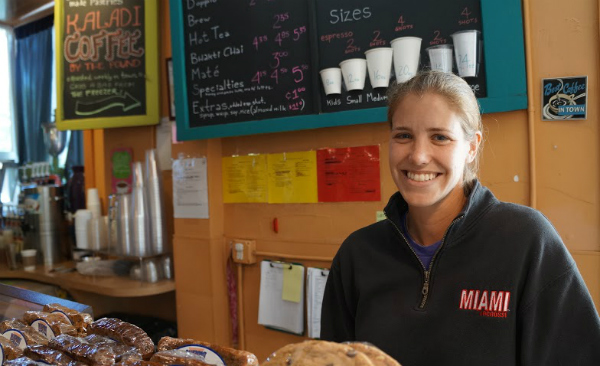 One of the baristas behind the bar at Wash Perk now owns the local hangout.

On July 1, Liz Snyder, 32, took ownership of Wash Perk coffee shop at 853 E. Ohio Ave. She previously ran her own coffee shop in the college town of Oxford, Ohio, for 10 years.

Snyder decided to leave Ohio for Ohio Avenue in January for a change of scenery and a chance to be closer to her brother, who lives in Denver. She landed a job as a Wash Perk barista after another job fell through.

At the end of June, Snyder bought the business from Teri Meehan, who founded the shop seven years ago with her partner, Debbi Main. Snyder declined to reveal how much she paid for it.

While studying English literature at Oxford’s Miami University, she worked as a barista near the school and decided to start her own shop with a friend in 2005, their last year of college. Her roommates were her first employees.

“We signed the lease and the loan documents before our 21st birthdays,” she said. “We built it from the ground up.

We had a really good situation being in a college town because there is a natural need for coffee space and independent businesses that aligns with the students’ needs.”

The business took root, and an annual influx of new students has kept it running. She said Wash Perk reminds her of her other shop, which she still owns.

“Teri says this is the grownup version of my shop in Ohio,” she said. “There’s still a community feeling, but the clientele is a little bit older and more established.”

She plans to expand the shop’s coffee and pastry offerings by buying from more roasters and bakeries in the area.

“We use Kaladi (Coffee Roasters), and they’re so easy to work with, but they’re not the only players in Denver,” she said. “I want to reach out and be part of the coffee world, which is really big and interesting.”

Several local bakeries, including Beet Box and Bluepoint, deliver goods to Wash Perk about four times weekly, Snyder said, but she hopes to offer a wider range of goods.

“I’m excited to have so many businesses to choose from here,” she said. “I’d like to take advantage of that and have things delivered fresh every day and feature different products.”