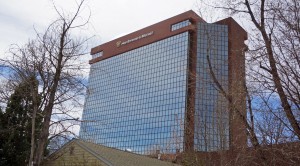 The Centerra office building, anchored by Northwestern Mutual, is under new ownership. Photo by Burl Rolett.

Northwestern Mutual has a little extra room to work in at a Colorado Boulevard building that already bears its name.

Northwestern Mutual now has all of floors 16, 17 and 18 at the office building it has worked out of for almost 30 years, which is off Colorado Boulevard near I-25.

“We looked at some of the opportunities in Cherry Creek and across the metro area, but felt like this building’s location stands right out,” said managing partner Scott Theodore. “We have the signage on the building, Colorado Boulevard is the most-traveled street in the area and I-25 is the most-traveled thoroughfare.”

The space previously was leased to a marketing firm, which has moved into another office in the same building.

Northwestern Mutual signed its lease expansion in October 2014. The agreement runs for 10 years.

Northwestern Mutual is adding people to its Denver-area operation as it expands its real estate footprint. About 105 people work out of the Centerra building now, and Theodore said the new space will host 15 or 20 more.
Acquilano Leslie designed the new office space. Provident Construction was the contractor on the renovations.

The Centerra office building, anchored by Northwestern Mutual, is under new ownership. Photo by Burl Rolett.

Northwestern Mutual has a little extra room to work in at a Colorado Boulevard building that already bears its name.