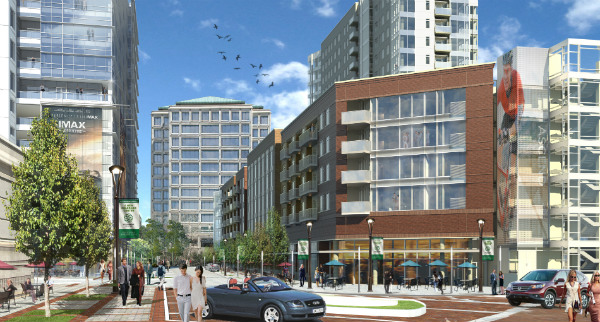 Nine years after buying a Colorado Boulevard office and entertainment complex, a Denver developer is putting its own shovels in the ground.

Lincoln Property Co. is beginning site work on a new 200,000-square-foot office tower, kicking off a new phase of development at Colorado Center that will include 250 new apartments, retail space and expanded parking.

It’s the first new construction project at the complex near Colorado Boulevard and I-25 since the late 1990s, and Lincoln is moving dirt without any leases in hand.

“We’re going on a spec basis; we have had a number of preliminary meetings and have good feedback so far,” said

Scott Caldwell, Lincoln’s senior vice president. “I think what we’re finding is companies and employees are looking for urban infill locations with access to transit, walkable amenities and things like that.”

Colorado Center has about 500,000 square feet of office space split among three buildings. The complex also hosts a 120,000-square-foot entertainment center with a movie theater and a Dave & Buster’s.

Colorado Center’s third office tower will rise out of a surface parking lot just east of Dave & Buster’s. It will include a six-story parking structure, eight floors of office space and ground-floor retail. Lincoln wants to finish the project around September 2016.

When the office project is about half-finished, Caldwell said, Lincoln will start on an apartment building just south of the rising office tower. The apartment tower will sit atop an existing seven-story parking garage and will include 180 units.

Lincoln also will expand the parking garage and wrap about 80 more apartments and ground-floor retail space around the deck itself. Caldwell plans to finish the apartment development by the middle of 2017.

“It could be a mixture of young millennial-aged workers. And we’re expecting some couples. We think we’ll have some empty nesters as well,” he said. “We have a pretty eclectic demographic in this area and it will cater to all those folks.”

Caldwell declined to say what Lincoln would spend to build its planned office and apartment towers. Office space will lease in the mid-$20s per square foot, he said, but Lincoln has yet to work out rental rates for its studio, one-bedroom and two-bedroom apartments.

Colorado Center’s existing office space is about 98 percent leased at rates in the mid-to-high teens, Caldwell said.
Lincoln bought the Colorado Center complex in 2006. The third office tower will be the first building Lincoln has built onsite. Caldwell said there’s room for one more major project at Colorado Center after the new office and apartment towers are finished.

“We have a hotel opportunity that is situated along the highway on the northwestern portion of the site,” he said.

“We think it makes a lot of sense to have a hotel to round out the full mix of uses.”

Lincoln Property Co. is beginning site work on a new 200,000-square-foot office tower, kicking off a new phase of development at Colorado Center that will include 250 new apartments, retail space and expanded parking.