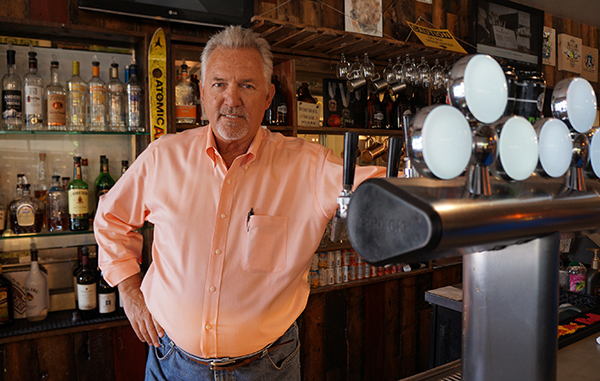 Thomas Hembree and his son, Mason, are working to raise $2 million to hop up their Aurora-based beer brand, Dude’s Brews, according to an SEC filing.

“We feel we’ve got a niche within the brewpub concept,” Thomas Hembree said. “We think we can (put) this throughout neighborhoods in Colorado.”

Dad & Dudes is a 4-year-old brewpub that makes some of its beer on-site and partners with two brewing companies – Rockyard in Castle Rock and Sleeping Giant in Denver – to make beer for distribution. This year, it will produce nearly 2,500 barrels to sell to about 400 liquor stores and 100 restaurants and bars in Colorado.

Matt Osterman, the owner of Sleeping Giant, said Dude’s has created a strong customer base at its 6730 S. Cornerstar Way location.

“They do have aggressive expansion plans, and in my mind, given that I see a lot of different approaches, that’s what it takes right now to separate yourself from the rest,” Osterman said.

Dad & Dudes sells three of its beers by the can, five by the keg and more on rotating taps in restaurants. The business hopes to roll out limited-edition bottles of beer in the fall and increase annual production to about 5,000 barrels during the next several years, Hembree said.

The pair also has plans to open two new Dad & Dudes locations in the suburbs around Denver, with more on the way.

“We will be able to open at least one new restaurant a year for the next five years,” Hembree said. “That’s a conservative estimate. There are a lot of preexisting restaurants that have closed down that fit our model that we can update.”

The company is on track to earn $2 million in revenue this year, Hembree said, up from $1 million in 2012.

The business had been brewing in Hembree’s mind for decades.

For 40 years, he helped restaurants such as Chevy’s, a Tex-Mex chain, grow their franchises. The job inspired him to try his hand at creating his own.

“Being able to do this together, this is my opus,” he said. “It took us a while to get through the learning curve, even though I’ve done it as an employee.”

At 3,200 square feet, Dad & Dudes is small in comparison to other breweries that make more of their beer on-site, Hembree said.

“This size is a much more appealing concept to someone who wants to franchise,” he said. “We can set them up for success. We already now have the system, the food, the beer and the concept. Other companies are telling us it’s (able to be franchised).”

The Hembrees plan to start selling beer in other states before establishing franchises outside of Colorado. Mason Hembree said beer sales and marketing around the state have driven buyers to visit the pub, a “spoke and hub” model he thinks will work elsewhere.

And if the franchise idea catches on, Mason said each location would differ slightly from the others to reflect local preferences.

“We have a brand of flagship beer that you would find consistently at each location, but each would offer some beers that you couldn’t find at other places and maybe some unique pizza options,” he said.