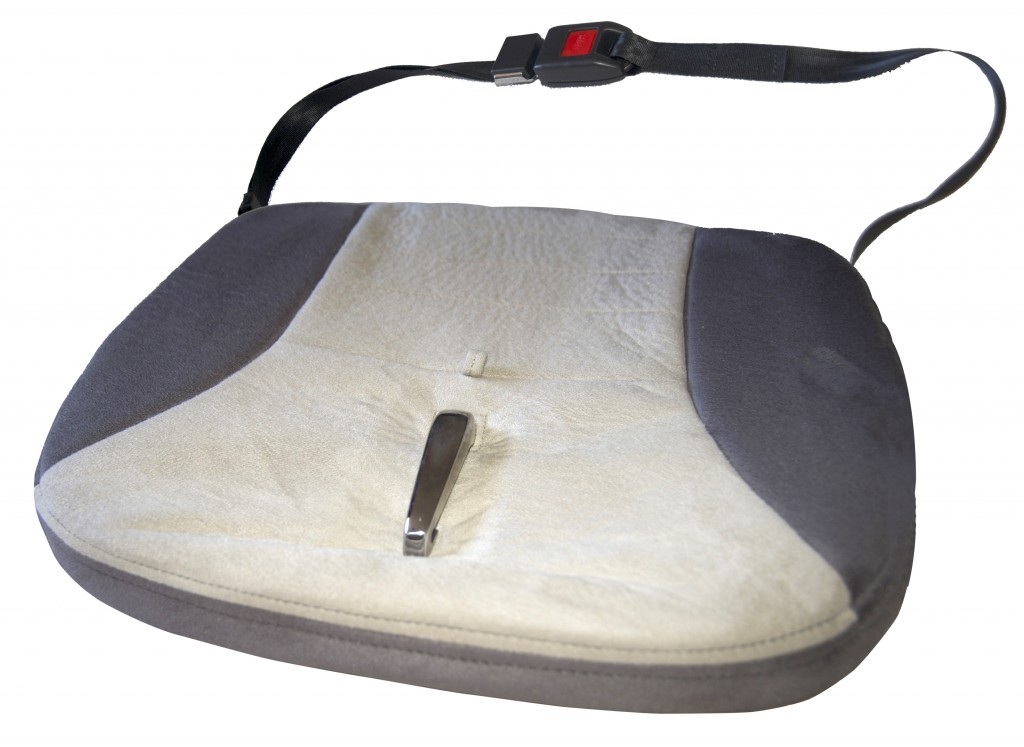 The Tummy Shield lets pregnant women feed the lap belt under a metal anchor, diverting it from their stomachs. Images courtesy of Safe Ride 4 Kids.

You can never be too careful.

Safe Ride 4 Kids, a car safety company launched by a former Lakewood firefighter, is pushing a car seat for expecting moms. The Tummy Shield is a seat cushion with a metal anchor that pulls the lap portion of a seat belt down between the legs so it rests over the thighs instead of over a baby bump.

It’s a product Safe Ride 4 Kids has quietly listed on its website since 2013. But after receiving its first full shipment of Tummy Shields from the product’s Australian manufacturer in February, the company is looking to ramp up U.S. sales.

“We’ve been trying to walk a very fine balance between a marketing effort and having the resources in place to make sure we have the product on hand,” said CEO Greg Durocher. “The last thing we want to do is have a customer who realizes the need for the product, yet not be able to meet that need and leave them feeling more at risk than when they found us.”

Safe Ride 4 Kids is co-owned by husband-and-wife teams Greg and Amie Durocher and Jeff and Stephanie Lobeck. The company launched in 2012 selling a seat belt safety vest for kids about 3 years old and weighing between 30 and 80 pounds.

Right now the travel vest still makes up about 97 or 98 percent of the company’s sales, but Durocher said he thinks the Tummy Shield will be the company’s most popular product in a year or two. Safe Ride imports the product from its Australian-based inventor and is the sole distributor for Tummy Shields in the U.S. 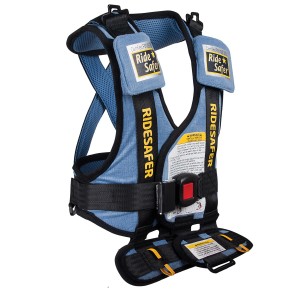 Safe Ride 4 Kids’ most popular product has been its vest, which helps guide and secure seat belts in the proper place.

While he’s only sold about 250 or 300 of them so far, Durocher said the Tummy Shield is a more promising item than the safety vest because it isn’t competing with any other products.

“The vest is an alternative to products that are already on the market – the car seat, the booster seat – there are other options for parents out there,” Durocher said. “With the Tummy Shield, there’s virtually nothing on the market to help pregnant women and their babies be safer.”

But even without an alternative product, the Tummy Shield could be a tough sell to expecting mothers who don’t see a hazard in driving with a standard seat belt. Durocher said pregnant women often don’t think anything of driving while pregnant until around the beginning of the third trimester, when driving with a seat belt gets uncomfortable.

The company hopes to reach potential customers by spreading educational material and getting the word to pregnant women through their physicians.

“Engaging doctors, midwives, nurses and clinical staff and getting them educated on the need for the product is crucial,” Durocher said. “They have to have the confidence that it truly is in their patient’s best interest to utilize the product during the pregnancy stage.”

Right now the Tummy Shield sells for $170 on the Safe Ride website. The company also rents the 9-pound cushion for $24 a month.

Safe Ride handles all of its warehousing and shipping in Phoenix, where the Lobecks live, but the company is on the lookout for a commercial fulfillment center to handle safety vest orders. Safe Ride is also looking to bring on its first employees aside from its original founders and will hire one or two trained car seat technicians in the next six months.

The company also pitched a group of 30 or so investors at a recent Denver Metro Small Business Development Center event in search of a $350,000 loan to ramp up inventory. Looking forward, Durocher said the company will look to add a rear-facing car seat for kids who are too small for the vest.

“Our business plan is to fill all the gaps in between and offer parents products for every stage of the child’s development,” he said.

The Tummy Shield lets pregnant women feed the lap belt under a metal anchor, diverting it from their stomachs. Images courtesy of Safe Ride 4 Kids.

A 3-year-old company that has built its business on car safety for toddlers is rolling out a new seat belt to protect children before they're born.