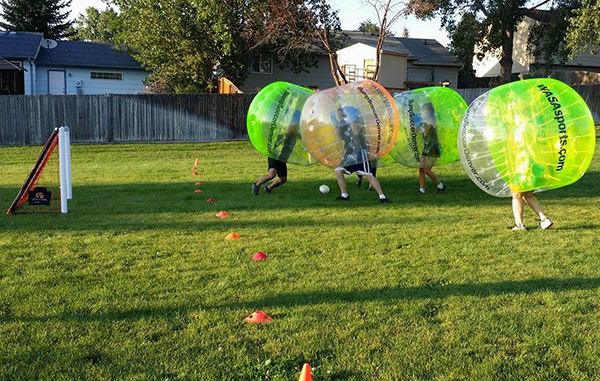 The man who brought bubble soccer to Denver is on a roll.

Brian Kovar, owner of Bump Soccer Denver, has his own line of the inflatable suits for sale. And he expects to host several games and events during Major League Soccer All-Star weekend in Denver next month.

“We shut down (pedestrian) traffic every time we play,” Kovar said. “People have to know how to play and how much it costs and everything about the game.”

Bubble soccer players wear inflated plastic spheres over their heads and torsos. The protective bubbles allows for players to unleash hockey-like body checks, and the cushion leaves them bouncing and rolling in what amounts to a non-stop sports blooper reel. Players’ legs are free to run and kick the ball.

The game was invented in Norway about six years ago. The Australians took it and ran with it, and it reached the United States about 1½ years ago, Kovar said.

The bubbles, which measure 6 feet in diameter, weigh between 42 and 50 pounds each, Kovar said.

“It’s a blast, and it’s a workout, too.” Kovar said. “Most people do not realize, after seeing my videos online, that this is much more of a workout than they signed up for. But once they start playing, they’re like kids in a candy shop, they just love it.”

Kovar said Bump Soccer will participate in the All-Star weekend for MLS, which is in Denver in July. And the company will also hold games at Skyline Park throughout the weekend.

“We want to expand our brand through the MLS network because they can reach way more people than I ever could,” Kovar said.

Kovar also founded another company, Bump Soccer USA, with the intent to either partner with bubble soccer companies in other cities or create a Bump Soccer franchise, he said.

Kovar first discovered bubble soccer while living in Dallas and launched the concept here in May 2014 after he was laid off from his job. He initially made between $5,500 and $6,000 each month renting the bubbles for parties and corporate events. He also started a weekly adult league that plays on Wednesday nights.

“I was a paralegal on the foreclosure side, and having to talk to someone like a veteran returning home from war about the fact that I was going to have to take his home was kind of eating me up,” he said. “It was a blessing in disguise that I got laid off when I did, because now I bring the fun to you.”

In January, he added to his bubble empire by redesigning the device and putting two versions of it on the market for $325 and $450 each. Bubble sales, coupled with rental income, have boosted monthly revenue to as much as $20,000, he said.

Interest in bubble soccer has expanded alongside the business. Bump Soccer rented bubbles for 38 events last month, the most the company has ever done in a 30-day period, Kovar said. He recently bought more bubbles and equipment to meet summer demand.

Kovar and his part-time staff of three set up games at outdoor parks and sports fields, as well as indoor facilities throughout the city. Bubbles for 10 people cost between $195 and $250, depending on whether the game takes place during a weekend.

Quickly growing interest in the goofy sport has given a boost to the startup that introduced the game to Denver last year. And its founder is rolling out more retail and a plan to capitalize on next month's Major League Soccer All-Star Game.