The Elitch Gardens theme park is under new ownership. Photos by Aaron Kremer.

Elitch Gardens had been open downtown along the Platte River for three years when its 60 acres of rides, shows and roller coasters first caught Rhys Duggan’s eye.

“I moved here in 1998 and came in with a fresh set of eyes, looked around and saw this asset. From that point on, it was an attractive asset to me,” Duggan said. “Fast forward 17 years, it was nice to finally have an opportunity to purchase it – it’s not an asset that’s traded very frequently.”

Duggan’s Revesco Properties, along with partners Second City Real Estate and Kroenke Sports Entertainment, bought Elitch Gardens on June 5. The deed for the property, recorded this week, shows the real estate traded for $140 million. Duggan declined to say how they financed the deal.

Revesco has been working on the Elitch Gardens deal for about a year now, Duggan said. Vancouver-based Second City joined in about halfway through negotiations. Kroenke Sports Entertainment, which owns the Pepsi Center next door, was third to the party. 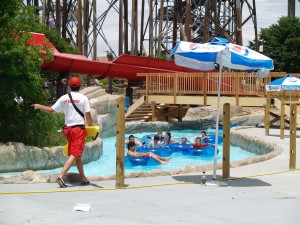 The water park includes seven slides along with other water rides and attractions.

“If you look at it, they’re a natural partner in this deal given their investments adjacent to the site and in Denver in general,” Duggan said.

Real estate development is a common thread among the trio of companies. But Duggan said they wanted the park for the coasters, water rides and $35 ticket price – not its downtown acreage and Platte River frontage.

“To be frank, it’s a very viable business that happens to be located on an important piece of land in Denver,” he said. “It’s a great operating business that provides stable cash flow, and so we were attracted to that.”

Still, Revesco, Second City and Kroenke now hold the deed to a sprawling stretch of prime downtown real estate. A raze-and-rebuild opportunity similar to Elitch Gardens doesn’t exist in downtown Denver, said Bill Mosher, a senior manager at Trammell Crow. A project of that size is comparable to something more like the 9th and Colorado or Stapleton developments.

But $140 million is a hefty price to pay for a pure land redevelopment deal, Mosher said. At more than $2 million an acre, it would take a dense development plan to make a profitable project.

That’s not to say there might not be development opportunities outside of the amusement park itself.

“That’s very expensive land if it’s going to be redeveloped for office or housing,” Mosher said. “I see it as buying an operating company and probably finding development opportunities, be it retail, a hotel or something else, that supports that business.” 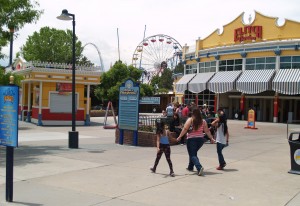 CNL has been paring down its portfolio lately, and for the most part, it has preferred to sell off blocks of similar holdings in multi-property mega sales.

Last year CNL unloaded 48 golf courses for $320 million. In May, the company sold 37 of its 38 senior housing properties in a single $763 million deal. CNL has its 16 ski resort holdings, including Crested Butte in Colorado, on the market.

The company owned 24 theme parks and was marketing them as a package sale, Duggan said, but split Elitch Gardens off for the Revesco deal.

The Revesco offer presented the CNL with “a unique opportunity driven by the interest of investors in the Denver market,” the company said in a prepared statement.

Duggan said his firm won’t be bidding on any of CNL’s other attractions.

“This was the only park we looked at,” he said. “It was a large enough deal that it consumed most of our bandwidth.”

The Elitch Gardens theme park is under new ownership. Photos by Aaron Kremer.

A group of firms - including the owner of the Pepsi Center - waited in line for about a year to scoop up the 60-acre amusement park along the Platte River.