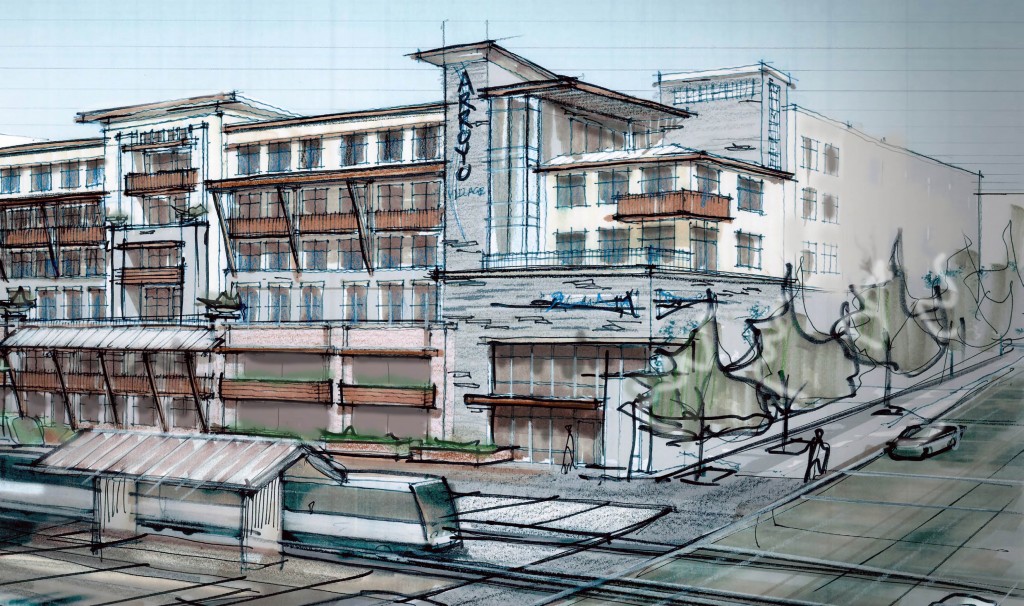 A low-income apartment complex is planned for a site near the Knox light rail station. Rendering courtesy of Rocky Mountain Communities.

A pair of nonprofits are teaming up to build 130 new affordable housing units.

Rocky Mountain Communities and The Delores Project are going in on a two-building $18 million housing complex on the 1200 block of King Street and Knox Court just off West Colfax. The project is about two years in the works, RMC’s CEO Richard Taft said, and should break ground near the end of 2016.

“We own a site that has three buildings that were LIHTC- (Low-Income Housing Tax Credits) financed buildings. They are 50 years old and they are in strong need of being torn down and replaced,” Taft said. “The Delores Project’s building is equally as aged as ours, so I approached their executive director and suggested a joint venture.”

The project, named Arroyo Village, will cover about 2 acres bounded by 13th Avenue, Knox Court, King Street and the Knox Station light rail stop. It will replace the two low-income and temporary housing complexes that currently sit on the property. RMC owns the eastern half of the site, and The Delores Project owns the western half. Both nonprofits will retain their real estate holdings throughout the development. 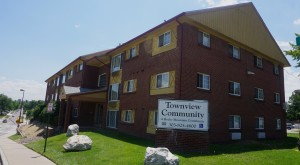 RMC’s Townview apartment complex will be demolished to make way for the 95-unit building. Photo by Burl Rolett.

The smaller of the two buildings will rise in the current Delores Project parking lot and will hold 35 one-bedroom units. The plan is to build the 35-unit building first, Taft said, move The Delores Project’s current residents over to the new building and then demolish the old one.

The Delores Project can currently house up to 50 people, according to its website, and focuses on short-term and emergency shelter.

Coinciding with the new Delores building, RMC will also begin demolition of its 27-unit three-building Townview complex. Those structures will be replaced by a new 95-unit complex with a mix of one-, two- and three-bedroom apartments.

The Delores building will be a permanent supportive housing project, Taft said, meant to house tenants who are mentally ill or formerly homeless. Its 35 apartments will be reserved for renters making 30 percent or less of the area’s median income.

For 2015, that figure comes out to $16,800 for a one-person household. The Colorado Housing and Finance Authority set a maximum monthly rent of $450 for one-bedroom apartments for tenants at that income level in 2015.

Zoning for the project was approved at a City Council meeting this month. Rocky Mountain Communities and The Delores Project will spend the next year lining up financing for the development. Taft said the partnership will seek federal low-income housing tax credits and state tax credits, as well as support from the city and the Denver Housing Authority.

Kephart is the project’s architect. Taft said the nonprofits have yet to settle on a general contractor but anticipate awarding a contract in the second or third quarter of 2016.

Arroyo Village will be the first affordable housing project Rocky Mountain Communities has developed in Denver. The nonprofit manages about 3,000 affordable housing units statewide, including four properties between Denver, Lakewood and Westminster.

A low-income apartment complex is planned for a site near the Knox light rail station. Rendering courtesy of Rocky Mountain Communities.

Two nonprofit organizations have teamed up and hatched an $18 million plan to redo their two neighboring housing complexes near Sloan's Lake.